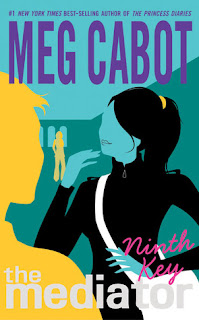 From Goodreads:
Everything is going great for Suze. Her new life in California is a whirlwind of parties and excellent hair days. Tad Beaumont, the hottest boy in town, has even asked Suze out on her very first date. Suze is so excited that she's willing to ignore her misgivings about Tad... particularly the fact that he's not Jesse, whose ghostly status--not to mention apparent disinterest in her--make him unattainable.

What Suze can't ignore, however, is the ghost of a murdered woman whose death seems directly connected to dark secrets hidden in none other than Tad Beaumont's past.

My Review:
Ah! This book of mistaken ghost identity, of poison ivy, and so much more! This was such a great book, and I enjoyed reading it so much! Such a great instalment in this series, and know that more is going to happen, well, yeah, I just really enjoyed it!

It was really great to have her dad in this book, because hey, just because he's dead, doesn't meant that he is out of her life! After all, she's a mediator, and seeing ghosts is just something that she does! So that was really fantastic!

How everything worked out, that Tad's dad was pretty crazy, and pretty much the whole family was, and that scene with Jesse and the fish, that was pretty hilarious, though it was a bit life threatening. But so great tor ead!

I forgot who the ghost was. But near the end, when Suze knows who the ghost isn't, I remembered who she was, and yeah, that was just so touching! Doc is my favourite step-brother, just like he is for Suze. Not that it's a hard contest!

Such a fantastic series, and I just need to reread more!