Today, I'd like to welcome over Larry , author of The Sixth Percept, over for a guest post!

STARTING OUT AS A WRITER - 5 THINGS YOU SHOULD KNOW

When I began to seriously write genre fiction thirty years ago, I was confident I was going to take the science fiction and fantasy worlds by storm. I was going to be the next Andre Norton or Robert Silverberg.

That still hasn't happened. But, I got a good education along the way, learned some important (if painful) lessons and have been able to apply those experiences to my writing and publishing endeavors in positive ways.

Here's a list of five things I didn't really know or expect when I started to write. These may seem simplistic or obvious but I talk to fellow writers who are still hobbled by some, if not all, of these points:

Not everyone is going to like your work.
I don't mean just the editor or publisher of the market you've submitted to. This goes for friends and family as well. And, if you're in a writing/critique group, you better develop a thick skin and, really, this is all for the good. You need to be able to listen to the criticism that's directed toward your work, not take it seriously if it's negative (and some of it will be!), and make the story better as a result.

A lot of writing and submitting your work is a waiting game.

You've got to learn to be patient. Some markets won't get back to you for weeks, sometimes months. And, every once in a while, a particular market may not reply at all (On the other hand, some will reply within a day or two, usually with a rejection--see my first point). It's perfectly all right to inquire on a submission's status but, in the meantime, when you're anxiously awaiting the results, work on something else. Write another story and send that one out!

Be prepared to be rejected multiple times.

Again--see my first point. This can happen to a really good piece even after it's been a contest winner--that's been my own personal experience. It may seem like a cliché but the work may be rejected because it isn't a “good fit” for the magazine, not because it's badly written. The important thing is to not allow a rejection to get you down. It's Ok to mourn but briefly--shake it off and move on. Send the rejected story out to another market immediately! Keep circulating it. Sooner or later, there'll be an editor who will like it and buy it. Any sale, especially early on in your career, is a real confidence-booster. All of us need a shot-in-the-arm periodically.

This is important particularly with format and story length. Don't just assume because you've sent out a good story that it'll even be read let alone accepted if it's obvious you didn't read that market's guidelines. There are exceptions to this, of course, but as a rule, make sure your story is formatted as the market dictates. It'll make it that much easier for the piece to be looked at.

Don't resend a rejected story back after revising it unless the editor asks.

I made this mistake early on a couple of times. You probably won't get a response at all if you send back the same story, no matter if it has been rewritten. As I pointed out in my “rejection point,” send it somewhere else.

Since the many, many, many, many rejections I've received since beginning my writer's life, I have sold several short stories and a debut novel. I still get rejected (being a published writer doesn't guarantee you'll always sell your next story) but I follow my points outlined in this post, which gives me a roadmap to attaining my writing and publishing goals.

It's not always easy and sometimes the efforts will get you down. But perseverance does pay off! Don't give up. Take the writing world by storm! 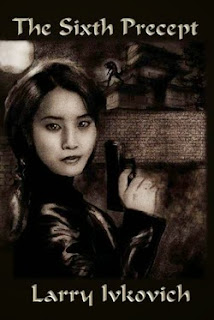 From Goodreads:
In 16th century medieval Japan, Yoshima Mitsu, who is gifted with psychic powers, uses her prescient abilities to send her young attendant, Shioko, into the future. There, Mitsu belives Shioko will be safe from the purges of the maniacal warlord Omori Kadanamora, his warrior monks, and his half-human, half-bestial Shadow Trackers.

In present-day Pittsburgh, police lieutenant Kim Yoshima is attacked by a creature out of someone's twisted nightmare. In the aftermath of the terrifying struggle, Kin finds a young Japanese girl named Shioko, lost, confused, and calling Kim "Mitsu" and her monstrous attacker a "Shadow Tracker."

Wayne Brewster dreams of a costumed hero, ArcNight. But more than that, he feels bizarrely connected to the fictional crime fighter as if ArcNight and his comic book world are real. And in all of his dreams, Wayne sees one constant, one face repeated over and over--the face of Kim Yoshima.

Using her powers, Kim, accompanied by Shioko and Wayne, travels by means of a temporal rift to feudal Japan. There they must assume different personas to fight Omori and creatures of Japan's mythological world to fulfill ancient prophesy and modern historical fact.

If they fail, history will be altered and the world will be forever changed.

My Review:
I really enjoyed reading this book! There were all these elements, from the different characters and their circumstances, and when they all came together, well, yeah, it was really great! And since it's a stand alone book, well, not going to happen again, so that made it even more worth it!

So a book that has time travel, and these various powers, well, it was really interesting and different, and I loved reading about it! And feudal Japan monsters? Yeah, those were really incredible to read about, and so unique!

Then there were these characters! From Kim, who looks like a mediaeval lady, to Wayne, with his dreams, and of the both of them going back to the past, to Mitsu, who went to the future, to get the others to come to the past!

I really enjoyed how it ended! Sure, they did take some losses, but in battles like this, well, it's pretty much inevitable that they would. It sucks, but they did win in the end, and that's the big thing that matters! History thanks them quietly!

Really enjoyable book, and yeah, I really liked it! 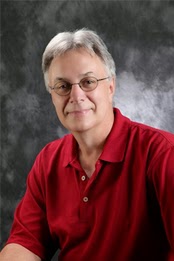 Bio:
Larry Ivkovich is an IT professional and the author of several science fiction, fantasy and horror short stories and novellas, published online and in various print publications and anthologies including M-Brane SF, Afterburn SF, Penumbra, Twisted Cat Tales, Abaculus III, Raw Terror, Triangulations, Shelter of Daylight and SQ Magazine. He has also been a finalist in the L. Ron Hubbard’s Writers of the Future contest and was the 2010 recipient of the CZP/Rannu Fund Award for fiction. His debut urban fantasy novel, THE SIXTH PRECEPT, is now available from IFWG Publishing, Amazon.com and Barnesandnoble.com. He is a member of two local writing/critique groups, the Pittsburgh Southwrites and the Pittsburgh Worldrights, and lives in Coraopolis, PA with his wife Martha and cats Trixie and Milo. 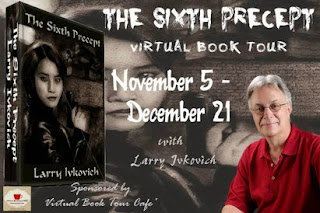