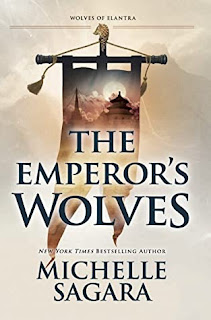 From Goodreads:
AT THE EMPEROR’S COMMAND

Multiple races carefully navigate the City of Elantra under the Dragon Emperor's wing. His Imperial Wolves are executioners, the smallest group to serve in the Halls of Law. The populace calls them assassins.

Every wolf candidate must consent to a full examination by the Tha'alani, one of the most feared and distrusted races in Elantra for their ability to read minds. Most candidates don’t finish their job interviews.

Severn Handred, the newest potential recruit, is determined to face and pass this final test — even if by doing so he’s exposing secrets he has never shared.

When an interrogation uncovers the connections to a two-decade-old series of murders of the Tha'alani, the Wolves are commanded to hunt. Severn's first job will be joining the chase. From the High Halls to the Tha'alani quarter, from the Oracles to the Emperor, secrets are uncovered, tensions are raised and justice just might be done…if Severn can survive.

My Review:
Yeah, this book was really awesome! It was so great to see a past Severn, to see how he became a Wolf (though a few characters commented that he'd be a great Hawk, which is funny). He's just such an interesting character, he basically has no ego, and has a keen investigative mind. I really enjoyed reading this book!

So this book wasn't what I expected. Because more often than not, we weren't in Severn's perspective. We were in the lone Barrani Wolf, Elluvian, a good portion of the time. We did get Severn's perspective, though it was more from the outside, you know?

I really enjoyed this hunt, involving Tha'alani murders 20 years ago. It was really interesting, and we saw a few familiar faces, as well as some new ones, and the investigation was pretty interesting! We got to see Severn and Ybelline's first meeting, see her before she was castelord, though they know that she's going to be so. So that was really fantastic!

Plus there's more to Severn than I suspected, given An'Tellarus's reaction to him. I'm guessing that this is going to be a big part in the future of the Severn stories, given one of the final scenes in the book, and I can't wait to explore that! Plus there's the future things that we know happen, like his chain weapon!

This book was a fantastic read, I really enjoyed it, and I can't wait for more from this world!