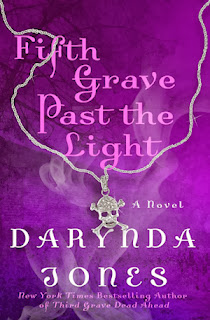 From Goodreads:
Charley Davidson may not look like your everyday, run-of-the-mill grim reaper, but she has vowed to reap grimness wherever she goes despite this unfortunate fact. Sadly, she gets sidetracked when the sexy, sultry son of Satan, Reyes Farrow, moves in next door. As he is the main suspect in her arson case, she is determined to stay away from him until she can find out the truth. According to her therapist, however, she lacks conviction.

When dead women start appearing in her apartment - lost, confused and terrified beyond reason - Charley has no choice but to ask for Reyes's help, especially when it becomes apparent that her own sister Gemma is the serial killer's next target. With his ability to observe incorporeally, surely he can find out who's responsible. And even if he can't, he is the one man alive who could protect Gemma no matter who or what came at her. But he wants something in return: Charley. All of her - body and soul. And to keep her sister safe, it is a price she is willing to pay…

My Review:
Oh, I just loved this book so much! I waited for this book since I read book 4, and yeah, with the ending of the last one, I wanted to know how the whole thing with Reyes moving into the one apartment was going to play out!

So the whole thing with Gemma, and the serial killer, well, I really enjoyed that twist there, though I felt bad for Charley for what she did when she didn't have all the facts, but in the end, that was a much better thing then if there hadn't been the twist!

When Charley gets the soap in her eyes? And the subsequent actions of Reyes? Namely, since he was also having a shower, to run from his, to hers? And then Amber seeing him naked? That was just too hilarious!

That ending! I want more! More, more, more! I want to see the reactions of her saying that, because yeah, it's a pretty inconspicuous thing to say to the guy who just proposed via a post it note! That is a cliff-hanger! I want to know more!!!! It is burning my brain!

Loved this book so much, and I can't wait for the next book, I really hope we get to see after this ending!