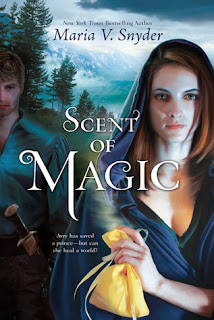 As the last Healer in the Fifteen Realms, Avry of Kazan is in a unique position: in the minds of her friends and foes alike, she no longer exists. Despite her need to prevent the megalomanical King Tohon from winning control of the Realms, Avry is also determined to find her sister and repair their estrangement. And she must do it alone, as Kerrick, her partner and sole confident, returns to Alga to summon his country into battle.

Though she should be in hiding, Avry will do whatever she can to support Tohon’s opponents. Including infiltrating a holy army, evading magic sniffers, teaching forest skills to soldiers and figuring out how to stop Tohon’s most horrible creations yet; an army of the walking dead—human and animal alike and nearly impossible to defeat.

War is coming and Avry is alone. Unless she figures out how to do the impossible ... again.

My First review of Scent of Magic
My Review:
I had forgotten how much I really, truly loved this book! And that's because it's all the little things, that make up the big things sometimes, that is a big part of what I love about books. And I forget those all the time. Which is just like, I want to go, bad memory!

Loved seeing Avry and Kerrick, with Avry, yeah, infiltrating the army, which was awesome because she taught them the various forest tricks that Kerrick taught her. And then Kerrick, up in his home realm, and then dealing with the problem there. Which was pretty awesome! Because they are going to be a pretty big force to be reckoned with!

Flea! That part was pretty emotional, and all the things that Avry learned about the dead soldiers, and then the prince's plan, that was pretty ingenious! Loved it! Though that made it harder for Avry, not being given much a choice, having it made for her!

Loved, and a bit hated the ending, because Tohon seems to have been taken out of commission, and a new bad guy is rising, but there was also a betrayal. And Avery and Kerrick could be together. But then he might be dying! Such a cliffhanger!

Loved this book so much, so enjoyable, and yeah, I can't wait for Taste of Darkness! It's going to be so good!