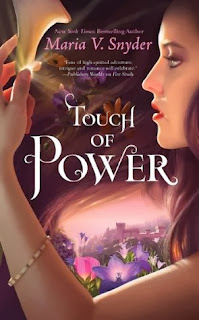 From Goodreads:
Laying hands upon the injured and dying, Avry of Kazan assumes their wounds and diseases into herself. But rather than being honored for her skills, she is hunted. Healers like Avry are accused of spreading the plague that has decimated the Territories, leaving the survivors in a state of chaos. Stressed and tired from hiding, Avry is abducted by a band of rogues who, shockingly, value her gift above the golden bounty offered for her capture. Their leader, an enigmatic captor-protector with powers of his own, is unequivocal in his demands: Avry must heal a plague-stricken prince—leader of a campaign against her people. As they traverse the daunting Nine Mountains, beset by mercenaries and magical dangers, Avry must decide who is worth healing and what is worth dying for. Because the price of peace may well be her life....

My first review of Touch of Power
My Review:
I loved reading this book so much! Its been a while since I was in this world, and a while since I read this book, which sucks, but I'm rereading the series for Taste of Darkness, which hopefully will be up on NetGalley, so I can read it soon!

Having Avry and Kerrick meet, and then their journey, that was just awesome! They don't seem too much to be a good potential couple, but that's half the reason why they would be! Though their bickering is a bit harsh, and part of their group didn't like Kerrick for a bit there!

The whole thing with the Prince who she's going to save-who she's supposed to give her life up for, being the one that started the rumour about the healers, that was a blow. Lowered my opinion of his image, because he wasn't around in this book!

Loved learning all those things about what the lilies can do, again, that they were so important, well, it makes sense, seeing as they are on the cover and all! And that they are the ones that can pretty much make a healer, that's just great!

This was just such a fantastic book, and I can't wait to reread more!