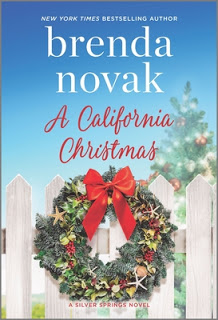 From Goodreads:
Up-and-coming TV anchor Emery Bliss can't imagine anything more humiliating than the sex tape her ex revenge-posted online. That is, until it causes her to lose her job on top of her self-esteem. Seeking solace—and anonymity—in Silver Springs, Emery isn't looking to get involved with another man anytime soon. But when she's thrown back into contact with Dallas Turner, she sees something that his many detractors have missed.
Being home for the holidays and his adoptive mother's wedding isn't where mountain climber Dallas feels most comfortable. Thanks to his troubled childhood, he'd rather be on a rock face alone than trying to connect with people. Emery, however, makes him want to overcome his past…somehow.
Both Emery and Dallas had been planning on a quiet, solitary Christmas, but the sparks between them are lighting a fire strong enough to last—possibly forever.
My Review:
This book was such a great read! I'm glad that we got another of the adopted sons getting a story, because there are 8 of them, though 2 are still at home, and another 2 are in college. I'm not sure if the 6th brother's misfortune had been mentioned in previous books, but it was in this one, and I'm hoping that he'll get his story. But not until after the next book, because book #8 has a crossover with the Whiskey Creek series, yeah!
A great deal of this book, I was fairly trembling with outrage. The situation that Emery was in, was just awful. That her ex posted a sex video of them-that she didn't know was being recorded-and then they both got fired because they signed contracts not to date coworkers, and then he gets hired back? Not cool! I'm so glad that she went ahead with the lawsuit.
But Dallas has his own problems, as well. He had a horrific childhood, with his dad killing his mom and sister, and now he's a climber that sometimes goes without ropes because he hasn't dealt with his issues. Because he thinks he deserves the guilt basically. And then his dad gets out of prison, and that's a whole mess. But it was just so great to read about these tow and their relationship!
Things did get serious, and when we found out who was behind it, that was totally unexpected! That ending was pretty darned satisfying, though I hope that that one dude gets the karma that it's mentioned that he's owed.
This was a really great read, and I can't wait for another Amos brother to find happiness!

Author: Brenda Novak
Series: Silver Springs #7
Read: December 2nd, 2020
Source: Edelweiss
Reason Why: I love her writing and this series, and it's a Prequel & Sequel Challenge 2020 Book and a WoW Book!
Publisher: Mira Books
Published: October 13th 2020
Posted by Louisa @ Words I Write Crazy at 10:50 AM