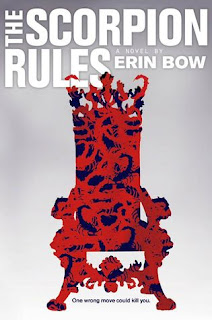 From Goodreads:
A world battered by climate shift and war turns to an ancient method of keeping peace: the exchange of hostages. The Children of Peace - sons and daughters of kings and presidents and generals - are raised together in small, isolated schools called Preceptures. There, they learn history and political theory, and are taught to gracefully accept what may well be their fate: to die if their countries declare war.

Greta Gustafsen Stuart, Duchess of Halifax and Crown Princess of the Pan-Polar Confederation, is the pride of the North American Precepture. Learned and disciplined, Greta is proud of her role in keeping the global peace, even though, with her country controlling two-thirds of the world's most war-worthy resource — water — she has little chance of reaching adulthood alive.

Enter Elián Palnik, the Precepture's newest hostage and biggest problem. Greta's world begins to tilt the moment she sees Elián dragged into the school in chains. The Precepture's insidious surveillance, its small punishments and rewards, can make no dent in Elián, who is not interested in dignity and tradition, and doesn't even accept the right of the UN to keep hostages.

What will happen to Elián and Greta as their two nations inch closer to war?

My Review:
So, uh, yeah, I stayed up till 2:30 in the morning to read this book, even though I had an 8 o'clock class, meaning I was getting up at 7. And I started this book just around midnight. I hope that says how much I enjoyed this book, how freaking awesome it is!

I absolutely loved this book! So fantastic, so different, so amazing! From Greta, a princess of a superpower, who controlls two thirds of the world's supply of water, knowing that makes it more likely that she won't survive being a prisoner of peace, to everybody else in this book!

Greta's narration was so funny! It's from there that I found my favourite lines of this book, of goats, mostly, but squash also plays a role! She had a dry wit, from who she is, to how she's been raised, and the whole Prisoner of Peace thing.

Talis. An AI that had a whole book of quotes from him, things that did make some sense, but there was a harshness there. Like, that if the country that war was being declared on, if they couldn't find a way to prevent war, then they would lose their child. And it's like, how could the ruler prevent war, and still come out with a country that could support it's citizens. Either Talis should help there because it's complicated, or their prisoner shouldn't be killed. I'm leaning towards the former!

What happened to Elián's grandmother, what Talis did to her, that was pretty horrible. I'm glad that Greta was able to avoid being around there, but what description that she gave was still pretty horrifying!

Between the love, and the war, these characters had a lot of problems! I enjoyed everything about it, and the difficult choices that were made! And oh, that choice that Greta made in the end, so that Elián could get away, that there weren't anymore consequences of the delcared war! A difficult, and strange choice that Greta made, that makes me wonder where the sequel, the companion book, is going to go! I want to know!

Favourite lines: "Anyone who things goats are less destructive than lions on fire does not know goats well." That certainly is a statement! "On the day goats refuse to eat zucchini, we humans will have to give up all pretense of domination over the agricultural world. The squashes will have won. Just for a moment I could vividly imagine World War Squash." My head doesn't quite get this, but I know it's funny! "Goats-the shapers of history." Love these comments about goats! "If one had not known it was a sexually excited billy goat crashing horn-first into a wood-and-wire gate, one would have thought it was a demon forcing it's way into the world. In fairness, there's not a big different." Yeah, this book is teaching me that!

Such a great, fantastic, wonderful book! So awesome, and I can't wait to see where this series is going to go, I'm so excited for that, and the wait is going to be killer!