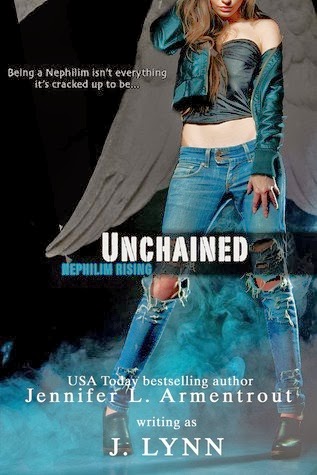 From Goodreads:
Between the pissed off creatures that want demon-hunter Lily Marks dead and the fallen angel who just...wants her, Lily is about ready to trade in forever for a comfy job in a cubicle farm.

The fact that she and Julian are civil to one another is enough to have her thrown out of the Sanctuary, but she can't shake her not-so-angelic stalker or how he brings her dangerously close to ecstasy.

Her forbidden relationship with Julian provides the perfect fuel for suspicion when a traitor is discovered to be working within the Sanctuary. Lily quickly finds herself hunted by well, everyone.

Her only hope is to discover the real traitor before she loses everything--and she'll need Julian's help. That is, if Julian is really there to help her...and not destroy her.

Yeah, being a Nephilim isn't everything it's cracked up to be.

My Review:
This was such a fantastic book! I enjoyed it so much, and I really want more! I know it says it's a series, but I have a sinking feeling that we won't get more, since there's no information on her site about a sequel, or about this being a series, even though Goodreads says it is. I really hope Goodreads is right!

I loved being in this world so much! It was really so amazing, and we got to see this world from both sides, Lily, who's been in it for what seems like forever, and Michael, who's just been found and discovered to be Nephilim, too!

The romance between Lily and Julian was just so great! They aren't supposed to be together (Though it's similar relationships that make more Nephilim) and there's the forbidden aspect there. Oh, and then there's the fact that most of the Nephilim sees Lily as a traitor.

Oh, the big twist! When we find out who the real traitor is? Yeah, that hurt, he was Lily's friend, or at least pretended to be, and yeah, that was so not nice! The only upside is that that people know that it wasn't Lily betraying them!

This was such a fantastic book, from the kick ass characters, to the way they mocked the names of the species like Minions and Deadheads, it was just fantastic! I'd really love more!