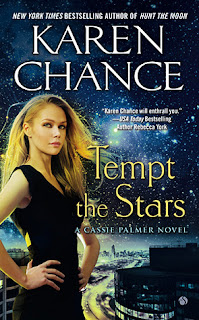 My Review:
I really enjoyed reading this book so much! It was a bit confusing, but there was just a lot going on, I just had to keep reading! I mean, it's Cassie, so of course there's a lot of situations that just keep coming and coming! She's getting closer to finding out that Dory's his daughter, yeah!

When she was with her parents in the past, that was, well, pretty much what you can imagine. Awkward, but wanting to have more, because we're finally spending some non-action time with her parents, and learning some things about them!

I think one of my most favourite scenes was with the flying carpet, and when they were breaking Pritkin out of the palace, that scene was just utterly hilarious! I just loved that scene so much, and I know I've said it before, but I'll say it again. Cassie gets herself in some pretty crazy situations!

I just loved that ending! She's going to work with Pritkin's dad, which is awkward in and of itself, to save Pritkin! And I can't wait for that! It took this book to get to a point where they could save him, now to actually do so!

I enjoyed this book, and now I desperately want more!