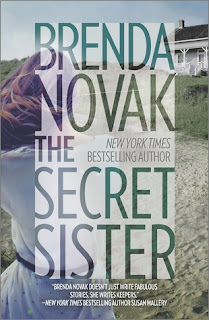 From Goodreads:
Did she once have a sister? Has her mother lied all these years? Why?

After a painful divorce, Maisey Lazarow returns to Fairham, the small island off the North Carolina coast where she grew up. She goes there to heal—and to help her brother, Keith, a deeply troubled man who's asked her to come home. But she refuses to stay in the family house. The last person she wants to see is the wealthy, controlling mother she escaped years ago.

Instead, she finds herself living next door to someone else she'd prefer to avoid—Rafe Romero, the wild, reckless boy to whom she lost her virginity at sixteen. He's back on the island, and to her surprise, he's raising a young daughter alone. Maisey's still attracted to him, but her heart's too broken to risk…

Then something even more disturbing happens. She discovers a box of photographs that evoke distant memories of a little girl, a child Keith remembers, too. Maisey believes the girl must've been their sister, but their mother claims there was no sister.

Maisey's convinced that child existed. So where is she now?

My Review:
Oh, this was such a fantastic book! I enjoyed it so much, it was so great! It was more like her earlier series, before Whisky Creek, a book that was just a little bit darker, and that's awesome, because similarity over and over gets boring, and Brenda Novak books are not boring!

I really enjoyed having the POV's that we got, because it let us in to more of the world, to know why characters were reacting the way they were, because we were, or were going to be in their heads. That was really fantastic!

These characters had some wounds! Maisey and Keith had their mother, who was controlling, and was a bit obsessed with being perfect. Keith was the big trouble maker of the family, and turned to drugs. Maisey lost her baby and then lost her husband to infidelity. And then finding out that she had a sister? Yeah. Kinda important!

While the "secret sister" was a bit part of the book, it didn't start until about 100 pages of about 300. But once it got going, with everything else that was happening, it was just utterly fantastic and awesome to read! Really enjoyed all the twists and turns and the end result! So awesome!

Really, really fantastic book by Brenda Novak, and I can't wait for the sequels, and what those sequels will be about!