Yeah, we have the cover of Third Strike by Kate Kessler! And it's so awesome! 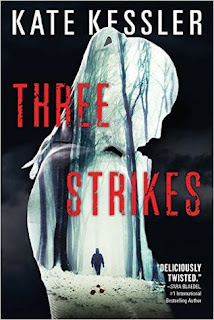 From Goodreads:
Three Strikes is the new novel in a thriller series where a criminal psychologist uses her own dark past to help law enforcement catch dangerous killers.


Love that this cover is similar to the other two-a mostly solid one colour background, the outline of a woman, and in that outline is something. Yeah, I can't find words to describe it. And yeah, it looks and sounds so great! I only just found this series last week, but I can't wait for June for this book to come out! What about you guys? Happy reading!
Posted by Louisa @ Words I Write Crazy at 10:57 PM