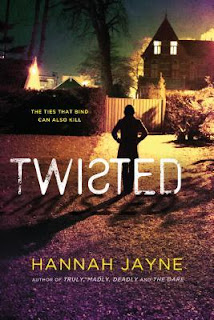 From Goodreads:
Guilty until proven innocent...

Bex has always been her daddy's little girl. After her mother left, it was just the two of them. Sure he spoiled her with clothes and jewelry, but what father doesn't dote on his daughter?

Except Bex's dad is alleged to be a notorious serial killer. Dubbed "The Wife Collector" by the press, her father disappeared before he could stand trial. And Bex was left to deal with the taunts and rumors. Foster care is her one chance at starting over, starting fresh.

But Bex's old life isn't ready to let her go. When bodies start turning up in her new hometown, the police want to use her as bait to bring her father in for questioning. Is Bex trapping a serial killer or endangering an innocent man?

My Review:
This book was really fantastic! But it had it's bad points, which I'm going to complain about, because most of the time, my reviews are pretty positive, and I need to clear my head of that! But I did really enjoy this book!

Beth Ann/Bex was an interesting character. She grew up without her mom, and started to grow up with her dad-before he was accused of being a serial killer. And we got to know her pretty well-I just wish that we'd gotten to know the other characters, you know? They didn't have a lot of depth, and especially Trevor, if we could've gotten to know him more, then that would mean that he was probably spending more time with Bex, and that would've been great, to balance things out!

Because yeah, there were times where it was mostly just Bex, and they were slightly annoying, she either thought her dad was innocent and being framed, or she thought he was a murderer and she had his monstrous blood in her veins. Sure, flip flopping was expected, but this felt more extreme, a full pendulum swing instead of a smaller one.

I kinda guessed that the necklace that was gifted to Bex was Darla's. Because her dad gave her jewelry from his victims, and Darla appeared to be a victim. What I don't get is how Chelsea and Laney didn't bring up the necklace again after they saw Bex wearing it-their friend was murdered and it seems logical that whoever gave it to Bex was the one that killed Darla. But I have a suspicious mind! Bah.

Yeah. Great book, but it had its flaws. Really enjoyed reading it!