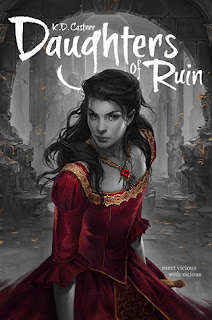 From Goodreads:
Game of Thrones meets Graceling in a thrilling debut that follows the four fierce princesses of enemy kingdoms as their worlds collide in the throes of war.

Not long ago, a brutal war ravaged their kingdoms, and Rhea's father was the victor. As a gesture of peace, King Declan brought the daughters of his rivals to live under his protection—and his ever-watchful eye. For ten years the girls have trained together as diplomats and warriors, raised to accept their thrones and unite their kingdoms in peace.

But there is rarely peace among sisters. Sheltered Rhea was raised to rule everyone—including her "sisters"—but she's cracking under pressure. The charismatic Cadis is desperately trying to redeem her people from their actions during the war. Suki guards deep family secrets that isolate her, and quiet Iren's meekness is not what it seems.

All plans for peace are shattered when the palace is attacked. As their intended futures lie in ashes, Rhea, Cadis, Suki, and Iren must decide where their loyalties lie: to their nations, or to each other.

My Review:
This book was really awesome! I really enjoyed reading about these characters in this interesting world! Some things were strange, like training the girls in warrior ways even though they are hostages. Yeah.

These girls were very different-Rhea was self-conscious and had a slightly skewed view of the world. Cadis was naive and wanted the best for everyone. Iren was quite and devious, and Suki was a brat, basically. I didn't like Rhea the most at the beginning, mostly because she had a huge chapter in the beginning, but by the end, by least favourite of the girls was Suki for what she did!

All of these girls go on journeys. Not just physical ones, but of Cadis becoming a bit more aware of the world, Iren trying to get out of her spy/shy shell, Rhea becoming a bit harder, and Suki just going crazy. She was the youngest, and her sister had supposedly died at the king who is holding them captive. Yeah.

There was a fairly big twist near the end! And there were hints that things were coming, that the previous king's son was still alive, but who it turned out to be, yeah, that was a big thing! And yeah, I want a sequel, because things can't end there!

This book was really fantastic, and yeah, I would really like more, because it was a fantastic book!