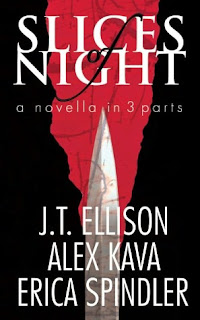 From Goodreads:
One killer: A psychopath who flies under the radar, moving from city to city, preying on the lost and forgotten.

Three investigators: Detective Stacy Killian from the New Orleans P.D., Nashville homicide lieutenant Taylor Jackson, and FBI profiler Maggie O'Dell--who witnessed some of the worst. And brought down some of the best.

Will this one slip through their grasps, as he has slipped through grasps of so many, for so long?

Erica Spindler, Alex Kava and J.T. Ellison bring you face to face with their own unique brands of evil.

My Review:
I wasn't planning on reading this whole thing. But after reading Blood Sugar Baby by J.T. Ellison, and finding out that these short stories were connected, yeah, I just had to read the whole thing. Though I still didn't read it in order because I read it 2nd story, 3rd story, 1st story!

The fact that it's the same murderer in each one, moving from town to town, was the main reason I read all 3. Because yeah, he was the one that was doing all this, and they didn't catch him per say, because he was stopped from killing another person in a permanent way!

I do wish that I'd been able to read more of the other two series before I read this series, but like I said, I wasn't expecting to read it! Because the Erica Spindler story was the end of the series, but yeah, oh, well!

I really enjoyed watching these bits and pieces of these series! There was a different focus on each one, the first, finding the baby, the second, there was a mix of the crime and who the victim was, and the third and final was getting the bad guy! Awesome!

Loved reading this collection of stories! So fantastic to read!