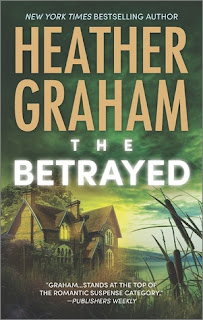 Maureen--Mo--Deauville now lives in the historic town and works with her dog, Rollo, to search for missing people. She's actually the one to find Richard-or more precisely his head, stuck on a statue of the legendary Headless Horseman.

Mo and Aiden, a new member of the Krewe of Hunters, the FBI's unit of paranormal investigators, explore both past and present events to figure out who betrayed Richard, who killed him and now wants to kill them, too. As they work together, they discover that they share an unusual trait-the ability to communicate with the dead. They also share an attraction that's as intense as it is unexpected-if they live long enough to enjoy it!

My Review:
This series is very long, but I've almost caught up to what's been published! I only have, like, 6 full length novels left to go! Yeah! That was half the goal, because I think I've gotten all of this series since The Unseen on NetGalley, and the other half was just reading them!

Mo and Aiden were really awesome! Mo worked from home as a greetings card creator, while also volunteering herself and her dog, Rollo, for the police. Aiden was FBI, and a new member of the Krewe, though his ghost seeing skills weren't on the same level as hers in the beginning, though that changed!

And of course there was a spark between them! This series is know for 3 things-romance, mystery, and ghosts. And once again, things come together very well! The ghosts that Mo knew were really awesome and some of them were historical figures! That was so cool!

That ending was really fantastic! The bad guys in these books are almost always unexpected, and Heather Graham did it again! Loved to see how these two caught the bad guy and got their happy ending! It was so great!

This book was really, really fantastic, and I can't wait to read more!