Week 48 Review: A World Without You 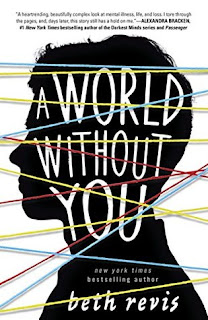 From Goodreads:
What if finding her means losing himself?

Seventeen-year-old Bo has always had delusions that he can travel through time. When he was ten, Bo claimed to have witnessed the Titanic hit an iceberg, and at fifteen, he found himself on a Civil War battlefield, horrified by the bodies surrounding him. So when his worried parents send him to a school for troubled youth, Bo assumes he knows the truth: that he's actually attending Berkshire Academy, a school for kids who, like Bo, have "superpowers."

At Berkshire, Bo falls in love with Sofía, a quiet girl with a tragic past and the superpower of invisibility. Soíia helps Bo open up in a way he never has before. In turn, Bo provides comfort to Sofía, who lost her mother and two sisters at a very young age.

But even the strength of their love isn't enough to help Sofia escape her deep depression. After she commits suicide, Bo is convinced that she's not actually dead. He believes that she's stuck somewhere in time—that he somehow left her in the past, and that now it's his job to save her. And as Bo becomes more and more determined to save Sofía, he must decide whether to face his demons head-on or succumb to a psychosis that will let him be with the girl he loves.

My Review:
This was a really great and in-depth look into mental illness. We on the outside knew that Bo was mentally ill and how it was for him, but not what it was. And then we got his sister, Phoebe's POV, and that was a great counterpart!

The thing about this book, was that it was so convincing and detailed, the world that Bo created. Like, in seeing future, one possibility for the school was the Academy burning down which happened. And then there was Phoebe's earring backing being loose. It was really convincing!

This family has been through a lot. And Sofia's death was pretty tragic. The way that he saw things-and then was seeing things how they really were-if we didn't know better, we'd think that this was a paranormal book. But it isn't.

The last chapter that Bo narrated, it ended with him making a choice, between reality, and the world in his head. And in the final chapter, the way that he acted, there's reasons why he could've chosen both. And I want to know what he chose!

Loved this book, it was enjoyable and thoughtful and great!