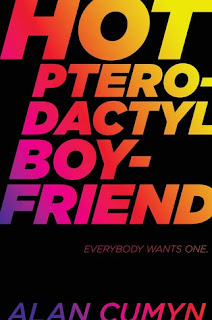 From Goodreads:
Prepare to be blown away—or rather, carried away on huge muscular wings—by this blissfully outlandish, bracingly-smart, tour de force about a teen who has to come to terms with relinquishing control for the first time as she falls for the hot new…pterodactyl…at school. After all, everybody wants him!

Sheils is very pleased with her perfectly controlled life (controlling others while she's at it). She's smart, powerful, the Student Body Chair, and she even has a loving boyfriend. What more could a girl ask for?

But everything changes when the first-ever interspecies transfer student, a pterodactyl named Pyke, enrolls at her school. There's something about him—something primal—that causes the students to lose control whenever he’s around. Even Sheils, the seemingly perfect self-confident girl that she is, can't keep her mind off of him, despite her doting boyfriend and despite the fact that Pyke immediately starts dating Jocelyn, the school's fastest runner who Sheils has always discounted as a nobody.

Pyke, hugely popular in a school whose motto is to embrace differences, is asked to join a band, and when his band plays at the Autumn Whirl dance, his preternatural shrieking music sends everyone into a literal frenzy. No one can remember what happened the next day, but Shiels learns that she danced far too long with Pyke, her nose has turned purple, and she may have done something with her boyfriend that she shouldn't have. Who's in control now?

Hilarious and relatable (despite the dinosaur), Hot Pterodactyl Boyfriend is about a teen who must come to terms with not being in control of all things at all times, break free of her mundane life, discover who her true self is, and, oh, finding out that going primal isn't always a bad thing.

My Review:
So this is a first for me. Almost all the books that I read, I really enjoy. I've only DNF'ed 1 book and I got 100/500 pages in. I've had books that I've enjoyed, but had their down sides. But this book, I finished it-barely.

I honestly wish that I hadn't read this book! If I hadn't, then I could still dream of the possibilities that this book could take. And it's sad, because there was so much potential in this book, and it was wasted. The synopsis makes this book sound amazing-and then this book did nothing with it.

First off, was the way that it was written. There were parts where it was like thoughts, and a bit scattered, and not fully finished. And then there were the plot holes, like the reactions to Pyke-the loving him, and no scared panic. Yeah.

And things just didn't quite make sense. He's a bird, with a beak and fur. How did the ladies find that attractive? I mean, it makes sense that it would be because he's a pterodactyl, but there's no explanation given. And the ending, yeah, didn't make sense, nothing was explained, it was just over.

This book was a disappointment. It sounded fantastic and failed to deliver in a big way. I'll still dream of the possibilities, and I kinda wish someone would take the synopsis, and write a whole 'nother book. That'd probably be better, even if was just a short story, because there's so many awesome places this book could've gone!