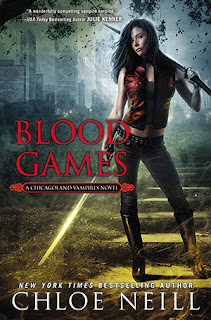 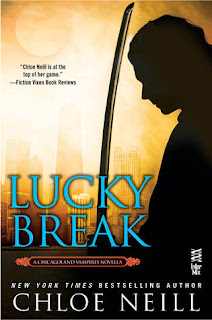 From Goodreads:
While Merit didn't choose to become a vampire or Sentinel of Cadogan House, she vowed to fight for her House and its Master, and she's managed to forge strong alliances with powerful supernaturals across Chicago. But even though Merit has had wild adventures, this may be her deadliest yet....


A killer is stalking Chicago, preying on humans and leaving his victims with magical souvenirs. The CPD hasn;t been able to track the assailant, and as the body count rises, the city is running out of options. Vampires and humans aren't on great terms, but murder makes for strange bedfellows. Can Merit find the killer before she becomes a target?

From Goodreads:
In this thrilling new novella from the New York Times bestselling author of Blood Games, vampire Merit bites off more than she bargained for when a romantic trip to a secluded Colorado town turns deadly.

Merit and Ethan are in desperate need of some alone time, far from the worries of Cadogan House, but trouble tends to follow wherever they go. Their attempt at a romantic getaway is quickly interrupted when one of Ethan's vampire friends shows up at their door--covered in blood and accused of killing her shifter husband.

Merit and her Master soon discover their vacation spot is far less idyllic than it appears. A centuries old quarrel between local vampires and shifters has made the town a perpetual supernatural battle zone, and this fresh blood has stirred the already volatile pot. Now, Merit and Ethan must put their passion on pause to figure out who's really responsible for the murder before all hell breaks loose...

My Review:
I loved reading these books! I've almost caught up to what's been published, just two more books, and then there's one final book in the series after that, I believe! Which is hard to consider, seeing that while this series is long and long lived, it still feels so fresh!

Blood Games was just so fantastic to read! After everything that happened previously, with the challenge, yeah, ti was so great to read this book! And for Ethan to be in the running for the leader, that was just great!

We also learned more about his past, because another one of the contenders to be the leader of the G.P. was a vampire that had by the same guy who created Ethan. Yeah. So that was a big bump in their road because Ethan didn't want to share!

Loved Lucky Break, because it was just them, really, mostly new characters otherwise. And there was a mystery at the heart of it, between the blood shed and the feud! And Merit was the one that figured it out, even though it was a sad ending!

Loved reading these books, and I can't wait to read more!