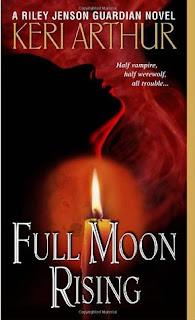 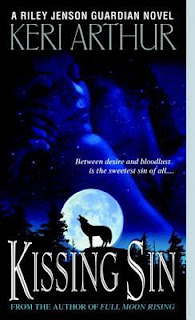 From Goodreads:
In this exciting debut, author Keri Arthur explodes onto the supernatural scene with a sexy, sensuous tale of intrigue and suspense set in a world where legends walk and the shady paths of the underworld are far more sinister than anyone envisioned.

A rare hybrid of vampire and werewolf, Riley Jenson and her twin brother, Rhoan, work for Melbourne's Directorate of Other Races, an organization created to police the supernatural races–and protect humans from their depredations. While Rhoan is an exalted guardian, a.k.a. assassin, Riley is merely an office worker–until her brother goes missing on one of his missions. The timing couldn't be worse. More werewolf than vampire, Riley is vulnerable to the moon heat, the weeklong period before the full moon, when her need to mate becomes all-consuming.…

Luckily Riley has two willing partners to satisfy her every need. But she will have to control her urges if she's going to find her brother….Easier said than done as the city pulses with frenzied desire, and Riley is confronted with a very powerful–and delectably naked–vamp who raises her temperature like never before.

In matters carnal, Riley has met her match. But in matters criminal, she must follow her instincts not only to find her brother but to stop an unholy harvest. For someone is doing some shifty cloning in an attempt to produce the ultimate warrior–by tapping into the genome of nonhumans like Rhoan. Now Riley knows just how dangerous the world is for her kind–and just how much it needs her.

From Goodreads:
From Melbourne's gleaming skyscrapers to its throbbing nightclubs, Riley Jenson's world is raging with danger and desire. A drop-dead-gorgeous werewolf–with a touch of vamp coursing in her blood–Riley works for an organization created to police the supernatural races. But when she wakes up naked and bruised in a barren alley, she knows only that she must run for her life.

Within moments Riley collides with the sexiest man she's ever seen: steely, seductive Kade, who is fighting a life-and-death battle of his own. With old lovers and enemies gathering around her, Riley knows she is being pursued by a new kind of criminal. Because in Riley's blood is a secret that could create the ultimate warrior–if only she can survive her own dangerous desires….

My Review:
These books were just so fantastic to read! I've been meaning to read her books for a while, and yeah, I started, and I couldn't stop! I loved this world of werewolves and vampires and shifters and clones and crossbreeds! It was so fantastic!

This series isn't going to be for everyone. The werewolves and their need for sex-having multiple partners until they find their soul mate, yeah, not for everyone! And that Riley has to bargain her body for information. Yeah.

I really enjoyed the mystery! There were a lot of levels, and it's not over yet, and there were a few moments were things were confusing because it was hard to keep track of who was being talked about when they couldn't mention names!

Riley has changed a lot already in these books! The possiblity to have a child of her own-and having to decide against it. That she really didn't want to be a guardian, but in the end, is going to be. And yeah, the guys that she has!