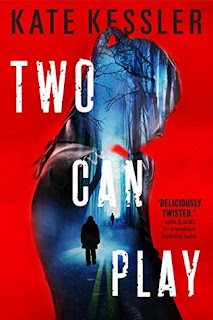 From Goodreads:
Two Can Play is the second book in a new thriller series where a criminal psychologist uses her own dark past to help law enforcement catch dangerous killers.

Halloween is approaching, and criminal psychologist Audrey Harte has been hired by the prosecution to help prepare for the trial of 19-year-old serial killer Ian "Boy Scout" Monroe. His one surviving victim, Tori Scott, is the star witness, but when someone begins killing with Monroe's M.O., the authorities -- and Audrey -- begin to wonder if Monroe had a partner. Keeping Tori safe is the main concern, but Audrey has also attracted the copy-cat's attention.
Audrey is drawn into a dangerous game of cat and mouse, and when someone close to her is abducted by the killer, Audrey has no choice but to play...

My Review:
This book was just so freaking awesome! Maybe not quite as good as the first one, because it wasn't as personal in the beginning, and it was others that drew her in to investigate, it wasn't her choice. Also, Jake didn't have as much time to play criminal overlord!

This book was so excellent, and only a little bit less than the first book. So yeah, it was just really, really great! I loved being in this world again, because yeah, it was just so freaking fantastic! These characters were back, and while Audrey has doubts because of Bailey, well, yeah. So good! Character growth, you know?

I kinda guessed who the other bad guy was, the one that wasn't caught with Ian. It was just the way that person acted, and some words that were chosen, that were just like, light bulb moment, that's the bad guy! So yeah, that was pretty awesome!

The ending was pretty darned awesome! It was highly stressful and personal, and I absolutely loved reading it! There was a cost, sure, but in the end, said bad guy was caught, and yeah, that was great! And healing with Audrey's arm, and her mom's cancer was going well! So yeah, great ending!

Loved this book so much, and I can't wait for Third Strike!