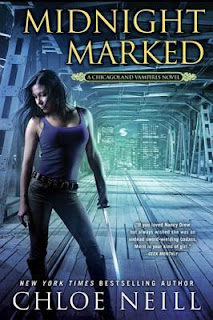 From Goodreads:
As the Chicagoland Vampires series continues, Merit and Ethan find themselves in a deadly game of cat-and-mouse, where winning may require the ultimate sacrifice...

Merit is one of Chicago's most skilled vampire warriors; these days, she doesn't scare easily. But she and Master vampire Ethan have made a new and powerful enemy, and he won't give up until he owns the Windy City.

With his last plan thwarted, he's more determined than ever to watch Cadogan burn. Ethan has put the House's vampires on high alert, but their enemy will stop at nothing, including pitting vampire against vampire...

In this deadly game of cat-and-mouse, the stakes are life or death—and winning might mean sacrificing everything...

My Review:
This book was just so fantastic! I've loved this series from the beginning-and now that it's almost finished, I'm still thoroughly enjoyed the ride! I'll be sad to say good-bye to these characters, but we're not there yet, and I enjoyed their latest adventure!

So there's the bad guy that was just unveiled in the previous book. And it kinda sucks, because Merit's brother has taken on the attitudes that their dad has now outgrown, and is on the bad guy's side of things!

One thing that this book brought up was a fight between Ethan and Gabriel in leadership, and holding information close to the chest. And it damaged the relationship, but it's not broken, and yeah, they worked together to bring the bad guy down!

Between the threat that they were facing, and the shifter alliance status, there was a lot going on! And there was also a proposal that Merit definitely accepted! And her ring, I looked it up, and if I was ever fortunate to get engaged and married, that would be the kind of ring I would want!

This book was fantastic, and I can't wait to see how this series is going to end!