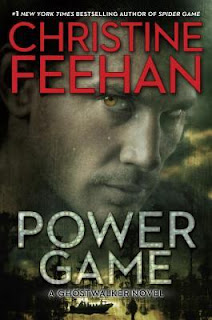 From Goodreads:
#1 New York Times bestselling author Christine Feehan is "one of the best storytellers around" (RT Book Reviews). Find out why as two lovers surrounded by greed and corruption discover there's no telling whom you can trust—or who will come out on top...

When members of a United Nations joint security force are taken hostage by radical terrorists in Indonesia, Captain Ezekiel Fortunes is called to lead the rescue team. Part of a classified government experiment, Zeke is a supersoldier with enhanced abilities. He can see better and run faster than the enemy, disappear when necessary and hunt along any terrain. There are those in the world willing to do anything for power like that...

A formidable spy genetically engineered to hide in plain sight, Bellisia rarely meets a man who doesn't want to control her or kill her. But Zeke is different. His gaze, his touch—they awaken feelings inside her that she never thought possible. He's the kind of man she could settle down with—if she can keep him alive...

My Review:
This series is the one that introduced me and hooked me onto Christine Feehan's writing! And yeah, it was a fantastic addition to this series! We had a long wait between Samurai Game and Viper Game, but the wait was well worth it and the series has only gotten better! Loved this book!

This book, not only were were introduced to Bellisa, but we learned more about Team 4, and got to meet more members! Like Malichai was the youngest of the Fortunes, and Joe's family took in Gino's after a ransoming attempt killed all of Gino's! And yeah, that was awesome, because these people were just incredible, what they can do, who they are! I can't wait to read their books!

Bellisia named a few more women who were, well, I can't say raised, because he ddn't do that, I'll say trained by Whitney and enhanced and such. And yeah, that's awesome, because there's not a whole lot of enhanced women out there that we know of, but a lot of guys!

What I want most-besides Whitney being taken down-is to see someone get enhanced. We seen these people afterward, but not how, and not before, which I'd also like to see! I can just picture it, a woman that Whitney's trained but is against him, watching him enhance the soldier that she'd be paired with-which is also another want, to have a couple want to be together, have time together, before they're paired! I know there's a difference, but I want to see it!

This book was really fantastic, and I can't wait for the next book in the series and the next couple!