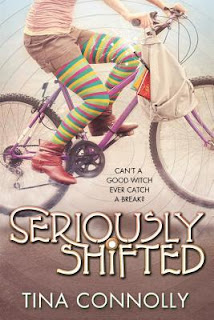 Teenage witch Cam isn't crazy about the idea of learning magic. She'd rather be no witch than a bad one. But when a trio of her mother's wicked witch friends decide to wreak havoc in her high school, Cam has no choice but to try to stop them.

Now Cam's learning invisibility spells, dodging exploding cars, and pondering the ethics of love potions. All while trying to keep her grades up and go on a first date with her crush. If the witches don't get him first, that is.

Can't a good witch ever catch a break?

In this book, Cam is learning spells and then casting them-while deciding what it means to be a good witch, and ethical. And she had a good yardstick to compare herself to-her mom's school group of witches and they game they play, that Cam got dragged into. Yeah.

There was also Devon and the aftereffects of the demon, and deciding who he is after all that was over. It didn't help that there was a witch casting spells on him that negatively impacted his musical performances! It was just so cute to watch them struggle with everything and their feelings!

Seeing Cam grow as a person and a witch was pretty awesome! And there were some other things, like how her father helped with hiding Leo's mom and Leo. And learning about shifters! And beating the bad guy, and how, because that was awesome!

I really, really hope that there's a 3rd book, so the mystery of Cam's dad's disappearance could be solved! Yeah. This book was really fantastic, and that's another reason why I want a 3rd book!