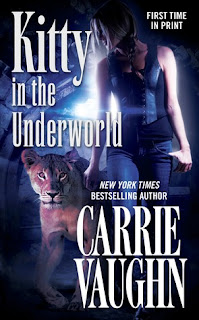 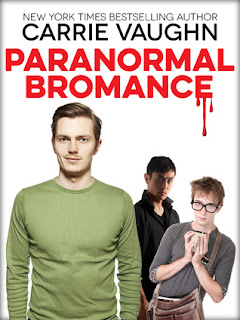 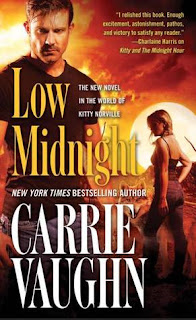 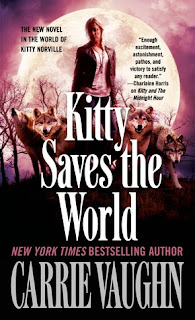 From Goodreads:
As Denver adjusts to a new master vampire, Kitty gets word of an intruder in the Denver werewolf pack's territory, and she investigates the challenge to her authority. She follows the scent of the lycanthrope through the mountains where she is lured into a trap, tranquilized, and captured. When she wakes up, she finds herself in a defunct silver mine: the perfect cage for a werewolf. Her captors are a mysterious cult seeking to induct Kitty into their ranks in a ritual they hope will put an end to Dux Bellorum. Though skeptical of their power, even Kitty finds herself struggling to resist joining their cause. Whatever she decides, they expect Kitty to join them in their plot . . . willingly or otherwise, in Carrie Vaughn's Kitty in the Underworld.

From Goodreads:
Sam has been a vampire for 15 years, and now he's having a midlife crisis. That is, if he were still human, he'd be turning 40 and having a midlife crisis. He's just met exactly the kind of woman he's always wanted -- but these days, all he really wants is blood. Maybe he could work through it, but his vampire roommates just don't understand. Wasn't unlife supposed to get easier?

From Goodreads:
Low Midnight spins out of the series on the wave of popularity surrounding Kitty's most popular supporting character, Cormac Bennett, a two-minded assassin of the paranormal who specializes in killing lycanthropes.

In his first solo adventure, Cormac, struggling with a foreign consciousness trapped inside him, investigates a century-old crime in a Colorado mining town which could be the key to translating a mysterious coded diary… a tome with secrets that could shatter Kitty's world and all who inhabit it.


With a framing sequence that features Kitty Norville herself, Low Midnight not only pushes the Kitty saga forward, but also illuminates Cormac's past and lays the groundwork for Kitty's future.

From Goodreads:
The final novel in the New York Times bestselling series

It's all come down to this, following the discoveries made by Cormac in Low Midnight, Kitty and her allies are ready to strike. But, when their assassination attempt on the evil vampire Dux Bellorum fails, Kitty finds herself running out of time. The elusive vampire lord has begun his apocalyptic end game, and Kitty still doesn’t know where he will strike.

Meanwhile, pressure mounts in Denver as Kitty and her pack begin to experience the true reach of Dux Bellorum's cult. Outnumbered and outgunned at every turn, the stakes have never been higher for Kitty. She will have to call on allies both old and new in order to save not just her family and friends, but the rest of the world as well.

My Review:
Ah, I reached the end of this series! And yeah, it was a little bittersweet because it's the end, but I just had to read it! This series has been fantastic from the beginning, and I had to read the whole thing! Of course!

Underworld was a bit like House of Horrors, because it was Kitty without Ben or Cormac. But it didn't have any characters that we'd know previous, once she was kidnapped, they were all new. And I enjoyed getting to know them, and I wondered how things were going to go from there, and yeah, it was just amazing to read!

Paranormal Bromance was just hilarious! And yeah, that's about all I have to say about that. Low Midnight was really awesome because we got mainly Cormac's POV, but there were also chapters where we got Amelia's POV, which was pretty awesome! I loved that!

Saves the World was just so great! We finally find out who is behind Roman, and yeah, you almost could've expected it, but yet somehow, it was still a surprised! I loved how things worked out, it was a really fantastic ending!

This series has been so great, and reading it to the end was just great, I loved it!

Kitty in the Underworld: