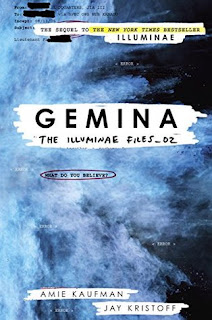 From Goodreads:
The highly anticipated sequel to the instant New York Times bestseller that critics are calling "out-of-this-world awesome."

Moving to a space station at the edge of the galaxy was always going to be the death of Hanna's social life. Nobody said it might actually get her killed.

Hanna is the station captain's pampered daughter; Nik the reluctant member of a notorious crime family. But while the pair are struggling with the realities of life aboard the galaxy's most boring space station, little do they know that Kady Grant and the Hypatia are headed right toward Heimdall, carrying news of the Kerenza invasion.

When an elite BeiTech strike team invades the station, Hanna and Nik are thrown together to defend their home. But alien predators are picking off the station residents one by one, and a malfunction in the station's wormhole means the space-time continuum might be ripped in two before dinner. Soon Hanna and Nik aren't just fighting for their own survival; the fate of everyone on the Hypatia—and possibly the known universe—is in their hands.

The first book had a huge attack, a killer A.I., the Phobos virus, and bad guys on their tails. This book had a strike team, the creepy lanima, drone fleets and multiverse antics! It was just so awesome, plus Kady, Ezra and Aiden are in this book!!!!

These new characters were so great to meet! Hanna, the princess of the station with a dad who thinks historical battles and learning how to fight are good father-daughter bonding times! Nik, the drug dealer and a part of a gang of family. I loved how they interacted because they weren't together for the majority of the book-and she didn't really want his advances in the beginning! (He held her longer then she would like, and to break free from his embrace, she broke his arm!)

Lexi Blue's Lollipop single was just so hilarious! Just the lyrics, which were totally inappropriate, and how the record company had implanted it in the Heimdall's audio system to replace whatever was supposed to be going playing-in the elevators, in the alerts, and yeah, that was so funny! The alert would go out for fire or something, and then it'd switch over to the song! It was hilarious!

Some of the names of the people that were killed in the habitat sector are YA authors! Kami Garcia, Leigh Bardugo, Kirsten White, Sabaa Tahir, (though they were Kristen Tahir instead of two separate names), Veronica Rossi, Victoria Aveyard, Scott Westerfeld. That was so nice to read!

Of course I have to comment on the formats that were chosen to narrate this story. Like Illuminae, there's private I.M.'s and written transcripts of video footage. But also got draws from Hanna's journal which were drawn by the wonderful Marie Lu, so yeah, that was so fantastic!

There were so many twists and turns in this book! Like, who the undercover agent guy was, because there was some trickery there! Or the corsage, which becomes an important clue to the multiverse! (I feel really bad for Universe B because they end up without a Hanna or Nik, or Ella, while Universe A had both. But it works out better then each universe having the couple split in two!

Loved reading this book, it was definitely a fantastic read, and I can't wait for the final book!