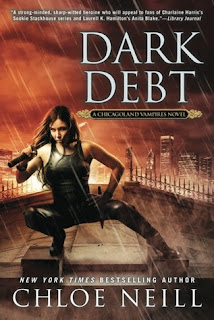 From Goodreads:
A vampire never gets old. But neither do his enemies. When a figure from Ethan's dark past makes a splashy debut in Chicago, Merit and her Master don't know whether he's friend or foe. But they'll have to figure out soon, because trouble is brewing in the Windy City.

At an exclusive society soiree attended by the upper echelons of the human and supernatural worlds, Merit and Ethan barely stop the assassination of a guest. When the target turns out to be a shady businessman with a criminal edge, Merit suspects a human vendetta. But the assassins have fangs....

The connections to Chicago's Houses go deeper than Merit knows, and even one wrong move could be her last...

My Review:
Yeah, this was another wonderful book in this series! Merit and Ethan are at their best, they resolved the conflict of him not telling her about what he was being blackmailed about, and yeah, that was really great because they have to face a lot of external threats in this book!

In this book, there's also the factoring of Merit being controlled by Balthazar, which she's been immune to since the beginning. And it was a question of if it was because Balthazar made Ethan and Ethan made Merit, or if her immunity was because of the drugs that she was given during her turn...

The politics and the machinations in this book! Wow! Vampires have had a roller coaster of a ride in terms of humanity's feeling for them, and putting those together...yeah. Ethan and Merit have a lot to face in this book!

This book, and the note from the previous book, are setting things up for the big finale, I believe! After that ending with another note, something tells me that this bad guy is going to be a huge threat! I can't wait to almost finish this series, because there's only Midnight Marked, a short story and Blade Bound and this series is done!