Week 38 Review: From Blood and Ash 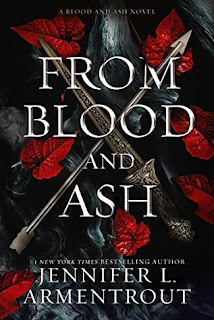 From Goodreads:
Captivating and action-packed, From Blood and Ash is a sexy, addictive, and unexpected fantasy perfect for fans of Sarah J. Maas and Laura Thalassa.

Chosen from birth to usher in a new era, Poppy's life has never been her own. The life of the Maiden is solitary. Never to be touched. Never to be looked upon. Never to be spoken to. Never to experience pleasure. Waiting for the day of her Ascension, she would rather be with the guards, fighting back the evil that took her family, than preparing to be found worthy by the gods. But the choice has never been hers.

The entire kingdom's future rests on Poppy's shoulders, something she's not even quite sure she wants for herself. Because a Maiden has a heart. And a soul. And longing. And when Hawke, a golden-eyed guard honor bound to ensure her Ascension, enters her life, destiny and duty become tangled with desire and need. He incites her anger, makes her question everything she believes in, and tempts her with the forbidden.

Forsaken by the gods and feared by mortals, a fallen kingdom is rising once more, determined to take back what they believe is theirs through violence and vengeance. And as the shadow of those cursed draws closer, the line between what is forbidden and what is right becomes blurred. Poppy is not only on the verge of losing her heart and being found unworthy by the gods, but also her life when every blood-soaked thread that holds her world together begins to unravel.

My Review:
Oh, man, this book was just fantastic! I was a little intimidated by this book, it's the largest book, I believe, that has been written by Jennifer L. Armentrout, though the sequels will be about the same or longer, this is the first one. Plus it's fantasy that's not set in our world, so that's a big change. And I just loved reading this book!

First off, this world with Ascensions, and the fallen kingdom and the cursed, was just so interesting, I wanted to learn more, of the war that took down the Atlantia, because it's coming back, being led by a prince who Poppy's country denies is a prince, since they took down his country, and thus, his legitimacy.

Watching Poppy and Hawke interact was just amazing! There's the whole, she's a Maiden thing, so she's forbidden what she feels with Hawke. The forbidden but oh, so wanted. The sparks just flew between them, they didn't have very many civil words, most of the time, they were at least bickering, and it was so fun to read!

That reveal. Oh, I mean, we only knew a bit, but I just wasn't expecting that. It was such a game changer, and combined with how this book ended, I'm just so excited to see where things go, because there were a lot of secrets that Poppy now knows, and I want to see what she's going to do with them!

This was such a fantastic read, I enjoyed it so much, and I can't wait to read book 2, which just came out, yeah!