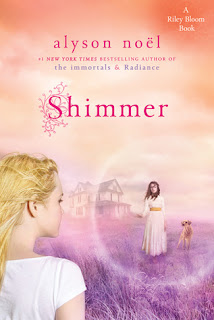 From Goodreads:
Having solved the matter of the Radiant Boy, Riley, Buttercup, and Bodhi are enjoying a well-deserved vacation. When Riley comes across a vicious black dog, against Bodhi’s advice, she decides to cross him over. While following the dog, she runs into a young ghost named Rebecca. Despite Rebecca’s sweet appearance, Riley soon learns she’s not at all what she seems. As the daughter of a former plantation owner, she is furious about being murdered during a slave revolt in 1733. Mired in her own anger, Rebecca is lashing out by keeping the ghosts who died along with her trapped in their worst memories. Can Riley help Rebecca forgive and forget without losing herself to her own nightmarish memories?

My Review:
This was an enjoyable, short book. I probably wouldn't have read it if a) it hadn't been written by Alyson Noel, and b) a spin off series of the Evermore series. Because I wanted to know Riley's story! Because yeah, death is not the end of stuff, and I enjoyed Alyson Noel's take!

Riley is growing up, and yeah, I expect, sooner or later, that we might get a physically reaction to that, because who want's to be a pre-teen forever? Or a teen forever? It's that awkward age, so I can't think of anyone who'd willingly want to be that age!

I enjoyed how the Dreamland part of the world got introduced, things are moving along! And how Riley's glow became a darker shade of green, and what that means for her, because yeah, that's going to become a situation!

I enjoyed this book, and I can't wait to read more!