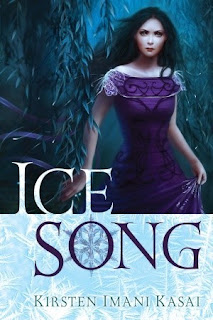 From Goodreads:
There are secrets beneath her skin.

Sorykah Minuit is a scholar, an engineer, and the sole woman aboard an ice-drilling submarine in the frozen land of the Sigue. What no one knows is that she is also a Trader: one who can switch genders suddenly, a rare corporeal deviance universally met with fascination and superstition and all too often punished by harassment or death.

Sorykah’s infant twins, Leander and Ayeda, have inherited their mother’s Trader genes. When a wealthy, reclusive madman known as the Collector abducts the babies to use in his dreadful experiments, Sorykah and her male alter-ego, Soryk, must cross icy wastes and a primeval forest to get them back. Complicating the dangerous journey is the fact that Sorykah and Soryk do not share memories: Each disorienting transformation is like awakening with a jolt from a deep and dreamless sleep.

The world through which the alternating lives of Sorykah and Soryk travel is both familiar and surreal. Environmental degradation and genetic mutation run amok; humans have been distorted into animals and animal bodies cloak a wild humanity. But it is also a world of unexpected beauty and wonder, where kindness and love endure amid the ruins. Alluring, intense, and gorgeously rendered, Ice Song is a remarkable debut by a fiercely original new writer.

My Review:
This book was interesting to read. It was hard to read, sometimes, because it was weird, and a bit disjointed, but that's because the main characters, Sorykah an Soryk are disjointed, they're different people in the same body, each having a turn at the reins, but not remembering what the other did.

It took me a little while to get into this book, there were just a lot of weird things that make it harder to get into the story, and the writing was flowery, and yeah, that's not really to my style, but I got used to it after a while!

The bits that were showing how the twins were doing, yeah, they were really good, because I liked seeing that they were alive, and pretty much well. They do have the whole problem of having been kidnapped, so yeah, there's that!

I enjoyed this book, though not as I do most other books. This was just a bit harder for me to read!