Hunted: Behind the Scenes

Today, I'd like to welcome over Cheryl Rainfield, author of Hunted, over for a behind the scenes perspective of Hunted!

In HUNTED, Caitlyn's brother Daniel is missing; he hasn't been seen (and she hasn't felt him through their psychic connection) since the night their father was murdered, and a woman snatched Daniel.

When I wrote that scene and the backstory around it, I was using some of the things that influenced my life but turning them around. I have a younger brother who I was close to, just as Caitlyn was close to Daniel. But I'm an incest survivor and ritual abuse survivor--my parents abused me--so when I turned 16, I ran away from home to escape the abuse. I would wonder how my brother was, and if he wondered where I was. I took that experience and turned it around in HUNTED; instead of Caitlyn running away, I had her brother be the one who'd been missing for years, and Caitlyn the one who was left behind, always looking for him, wondering if he was okay.

I think the emotion and emotional truths that we put into our writing help make the stories more powerful--something that resonates with readers. I drew on my emotion and my past to write that scene, but mixed it up using creativity. 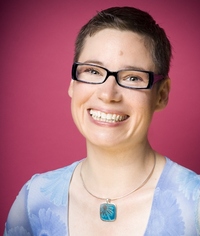 Email ThisBlogThis!Share to TwitterShare to FacebookShare to Pinterest
Labels: behind the scenes, book tour, books