Week 13 Review: The Diamond of Darkhold 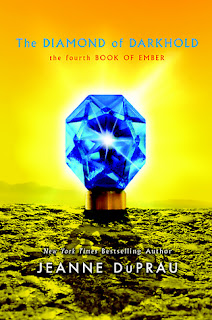 From Goodreads:
It’s been several months since Lina and Doon escaped the dying city of Ember and, along with the rest of their people, joined the town of Sparks. Now, struggling through the harsh winter above ground, they find an unusual book. Torn up and missing most of its pages, it alludes to a mysterious device from before the Disaster, which they believe is still in Ember. Together, Lina and Doon must go back underground to retrieve what was lost and bring light to a dark world.

My Review:
I enjoyed this book! There was a great mystery, and it forced the characters to go back to Ember, which dredged up some memories, and yeah, I just really enjoyed it a lot! Though Lina and Doon are just a little bit too young for my tastes, to read about!

This treasure stuff was mentioned in the last book with Lina and Doon, and yeah, it was really nice to really explore it, and find clues, and then start on the journey! I mean, this world has been through hell, and it's really starting to rebuild, but it's hard!

I enjoyed this ending, it was really good, and just made things easier for these characters, and they were just about as happy as they can be, and it was a lot of fun to read about that! It was just a really great ending to the series!

Yeah, I really enjoyed this book, and now to read books that are more my age, because this was just more a middle grade-young high school age book, mostly!