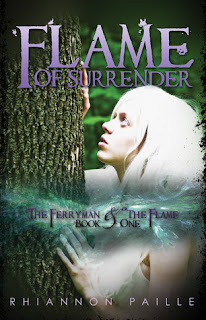 From Goodreads:
The boy who follows death meets the girl who could cause the apocalypse.

Krishani thinks he’s doomed until he meets Kaliel, the one girl on the island of Avristar who isn't afraid of him. She's unlike the other girls, she swims with merfolk, talks to trees and blooms flowers with her touch. What he doesn't know is that she’s a flame, one of nine individually hand crafted weapons, hidden in the body of a seemingly harmless girl.

Nobody has fallen in love with a flame until now. She becomes Krishani's refuge from the dreams of death and the weather abilities he can’t control. Striking down thousand year old trees with lightning isn't something he tries to do, it just happens. When the Ferryman dies, Krishani knows that he's the next and that a lifetime of following death is his destiny.

And Kaliel can't come with him. The Valtanyana are hunting the flames, the safest place for her is Avristar. Krishani can't bear to leave her, and one innocent mistake grants the Valtanyana access to their mystical island. They're coming for Kaliel, and they won't stop until every last living creature on Avristar is dead. She has to choose, hide, face them, or awaken the flame and potentially destroy herself.

My Review:
This was a very weird book. It was hard to connect the beginning, to most of the rest to it. And there were all these names and titles, and it was pretty hard to keep things straight. And yeah, I just want to complain, because I'm in a slightly irritable mood right now!

It took me a while to read this book, on and off, which didn't help with the feeling that things were off. And it was just this circle cycle, but I finally finished it, so yeah, I'm happy! And yeah, there were some deaths, but when it says in the synopsis that bad guys are coming to kill everyone on the place, you can expect some deaths!

The ending was a bit sad, seeing everything that had happened, and what's going to happen because of it. I mean, she accessed her powers, and there was a lot of destruction, but they are alive-but yeah, things still aren't quite going their way!

I enjoyed this book, it was just, something about it got on my nerves!