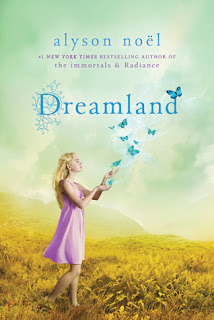 From Goodreads:
Riley’s finding that the afterlife can be a lonely place when all you do is focus on work. So she goes to the place where dreams happen, hoping to find a way to contact her sister, Ever. She meets the director, who tells her about the two ways to send dreams. As a Dream Jumper, a person can jump into a dreamer’s dream, share a message, and participate. As a Dreamweaver, an entire dream can be created in a studio and sent to the dreamer. But Dreamweaving was outlawed decades ago, and the studio was boarded up. Thinking it’s her only way to reach out to her sister, Riley goes in search of the old studio. There she finds a ghost boy, who’s been creating and sending nightmares to people for years. In order to stop him and reach out to Ever, Riley is going to have to confront and overcome her own fears.

My Review:
This book, for me, is Riley's down point in the series. It's in this book that she makes some decisions, that I, from the outside, can tell are wrong. But she does learn some things from this, so yeah, that was really good!

I can't tell if this is during, or after, the Evermore series. I mean, I know Riley contacted Ever in that series. But I don't remember the specifics of that, so yeah, this could be that stuff lining up, or it could be new stuff. I just don't remember.

Yeah, Riley made some not so good choices, for good reasons, but she still made the wrong choices. And there's going to be some consequences for that. But yeah, things are better, and looking up, and I can't wait to read more!

I enjoyed this book, it was nice and quick, though it's not really for my age group, so not recommended for high schooler's, except maybe grade 9'ers, And lower!