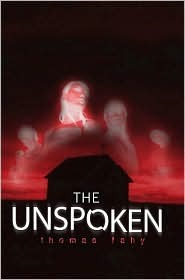 From Goodreads:
"In five years' time, your greatest fear will consume you. It will rob you of your last breath."
Five years ago six children who lived with their families in Jacob Crawley's Divine Path religious cult escaped by burning the compound to the ground. They are reunited at the funeral of Jacob's son, Harold. Harold died of drowning -- his worst fear -- even though his body was found miles from any water. And it seems that each of the teens is marked for murder -- as Crawley had predicted years earlier. Can any of these teens save themselves?

My Review:
This book was really creepy. I mean, the fact that this group, when they were kids, had to burn down the cult they were in to escape it, is bad enough. But to be apparently cursed with dying by your worst fear? And then having it happen? Even worse!

I really felt for these characters. They escaped a bad situation, and then were living pretty much better lives, all around. And then this catches up with them, and it's like their lives are put on pause, because they have to deal with this. Or they might die. Not fun.

I kinda wish that this could be a series. I mean, that would mean that these characters would be under further threat, but a) then we'd get to spend more time with them, and b) we could figure out more of what was going on!

This was a really fantastic book, I enjoyed it a lot, and I'd really love this to be a part of a series!