Week 11 Review: A Need So Beautiful 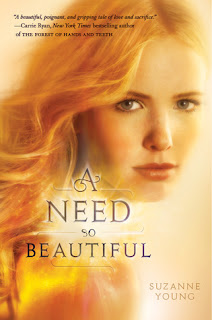 From Goodreads:
We all want to be remembered. Charlotte's destiny is to be Forgotten...

Charlotte’s best friend thinks Charlotte might be psychic. Her boyfriend thinks she’s cheating on him. But Charlotte knows what’s really wrong: She is one of the Forgotten, a kind of angel on earth, who feels the Need—a powerful, uncontrollable draw to help someone, usually a stranger.

But Charlotte never wanted this responsibility. What she wants is to help her best friend, whose life is spiraling out of control. She wants to lie in her boyfriend's arms forever. But as the Need grows stronger, it begins to take a dangerous toll on Charlotte. And who she was, is, and will become--her mark on this earth, her very existence--is in jeopardy of disappearing completely.

Charlotte will be forced to choose: Should she embrace her fate as a Forgotten, a fate that promises to rip her from the lives of those she loves forever? Or is she willing to fight against her destiny--no matter how dark the consequences.

My Review:
This was a really interesting book! The whole idea of a Forgotten, someone who helps strangers, and isn't remembered, yeah, very interesting! And seeing as the consequences of it for Charlotte, she's against being one. But since it's a duology, well, yeah. Things happen!

I felt really bad for Charlotte, she didn't ask for this, and it's not an easy thing. And she hasn't even started yet! It's just what's happening to her, that's setting her up for starting. And it doesn't help that she has an outside, corrupting influence in her life!

That ending, was just so good! Not so good for some of the characters, and not too, too fun for Charlotte, but it was the right decision, and yeah, while it was hard to make, it's the one that's going to lead to hopefully good things!

Yeah, this was a really great book, and the wait is going to be utterly evil!

Author: Suzanne Young
Series: A Need So Beautiful #1
Read: March 13th, 2012
Source: Library
Reason Why: I had it on by TBR pile so it became a RR book!
Publisher: Balzer and Bray
Published: June 21st 2012