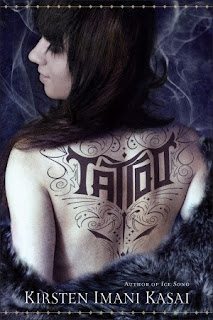 From Goodreads:
HER FATE IS IN HER FLESH.

In an environmentally fragile world where human and animal genes combine, the rarest mutation of all—the Trader—can instantly switch genders. One such Trader, the female Sorykah, is battling her male alter, Soryk, for dominance and the right to live a full life.

Sorykah has rescued her infant twins from mad Matuk the Collector. Her children are safe. Her journey, she believes, is over, but Matuk’s death has unleashed darker, more evil forces. These forces, led by the Collector’s son, cast nets of power that stretch from the glittering capital of Neubonne to the murky depths below the frozen Sigue, where the ink of octameroons is harvested to make addictive, aphrodisiacal tattoos. Bitter enemies trapped within a single skin, Sorykah and Soryk are soon drawn into a sinister web of death and deceit.

My Review:
Yeah, it was hard enough to get through Ice Song, this book, I read bits and pieces, and then yeah, the ending. Which wasn't quite what I expected, but it was a pretty good ending, considering everything! I liked it.

I really don't have much to say about this book, I mean, the whole struggle between Sorykah and Soryk, well, yeah, that was pretty interesting, and makes me wonder how the Traders would be accepted now. And how would they think of themselves.

And yeah, the fact that Soryk was the one that ended up with the control, even though it was born her body, yeah, not sure that I liked that, but oh, well. I had enough that I didn't like/was just not caring about, and yeah.

Yeah, that's about all that I can think of to say about this book. It just didn't inspire much in me, it was just there, and I just barely got through it. Yep. Bye, bye!