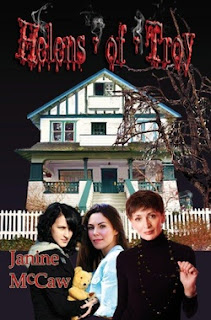 From Goodreads:
"The Gilmore Girls meet Buffy the Vampire Slayer."

Fifteen year old Goth-chic Ellie has a lot of explaining to do. She's just moved to the small town of Troy, fought with her uptight mother Helen, met the boy of her dreams and found a dead body on her sexy "new-age" grandmother Helena’s porch. All on the first night!

But Ellie's not alone. Helen is hiding something. Helen knows all about the kind of eerie dreams her daughter is having — the dreams that show the whereabouts of the missing children of Troy — because she's had them herself. But she’ll never admit it. Not while Ellie's sex-crazed friend Ryan is safely behind bars for the murders. Helen knows what it’s like to be attracted to dangerous men.

Then there's the little matter between Helena and Gaspar Bonvillaine, the teenaged vampire who is learning to feed on young prey. Now that he's caught Ellie, he doesn't know whether he wants to kill her or turn her to the dark side and keep her forever. Helena should have finished him off when she had the chance.

To survive the vampire feeding frenzy surrounding them, mom Helen needs to come to terms with her own insecurities and deal with the gifts she has. Helena must learn to ground herself for the good of mankind and more importantly her own family. And Ellie has the toughest choice of all. Ellie must decide whether its time to let her own childhood go and become the woman she is destined to be, one of the ageless and timeless "Helens of Troy".

My Review:
This book was weird! But I enjoyed reading it a lot! I mean, with a combo like the above, even though I've only seen Buffy, what could go wrong? This was a weird, eclectic, awesome book, and I enjoyed every word!

So from the title, it kinda makes you think, like, there's a Helen of each generation. And in a way, there is. But it's more a title, of looks, then of a name. And I enjoyed the mythology around it, and all the world building there, even if this is a stand alone book!

This book was real. From the characters, to the dialogue, to everything that they did, it was authentic. It might have been supernatural, but it was true to the characters, and I enjoyed that a lot! It made it both easier, and harder to predict what would happen next!

I just really enjoyed this book, the humour and awesomeness, and yeah this was such a great book!

Currently enjoying my "Helen" years, I live in Vancouver, Canada, but originate from the centre of the universe (Toronto). I spent my "Ellie" years in a town called Mount Forest, also in Ontario. I am not thinking about my "Helena" years quite yet.

I graduated from Humber College's Cinematography course many moons ago, and spent a few decades working in the Canadian Television industry (distribution).

In 2006, I wrote my first novel, "Olivia's Mine" that is a fictional account of the disasters that happened at Britannia Beach (BC) in the early 1900's. You can purchase it in the gift shop at The BC Museum of Mining, or through Chapters, Barnes and Nobel or Amazon. If you live in Canada, you can most likely "check it out" through your local library.