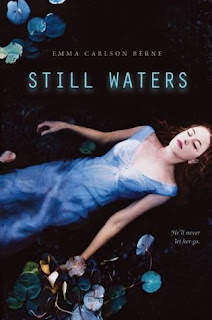 From Goodreads:
Hannah can't wait to sneak off for a romantic weekend with her boyfriend, Colin. He's leaving for college soon, and Hannah wants their trip to the lake house to be one they'll never forget.

But once Hannah and Colin get there, things start to seem a bit...off. They can't find the town on any map. The house they are staying in looks as if someone's been living there, even though it's been deserted for years. And Colin doesn't seem quite himself. As he grows more unstable, Hannah worries about Colin's dark side, and her own safety.

Nothing is as perfect as it seems, and what lies beneath may haunt her forever.

My Review:
This was a really creepy book, set in mostly the space of a weekend, where a boyfriend goes temporarily crazy, and almost becomes his brother as he was when he killed his girlfriend, even calling Hannah the girlfriend's name, all because Colin was traumatized when the brother saw that Colin saw the brother kill the girl, and tried to kill Colin the same way-drowning in the lake. Yep. It was really freaky, but it was very short, and yeah, it was a really good book!

It starts off with Hannah wanting a getaway, and thinks this summer house of Colin's family would be a good place to go. But Colin acts strange, like leaving the photo on the side of the road, or just blanking out. And the nearest town is pretty far away, and it's very strange and creepy.

As the weekend progresses, so does Colin's strange behavior, reacting badly to the boat and the lake, to the point where he takes out key components in the truck, and trying to kill her. And it was really scary and heart-pounding!

And when they're at the hospital, and the whole story is learnt, well, it is pretty much brushed under the rug, but Hannah and Colin have grown closer. And while that seems quite strange, Colin wasn't himself, he wasn't to blame, his brother was.

This was a great, chilling book, and it's a quick read, so I hope you guys check it out!