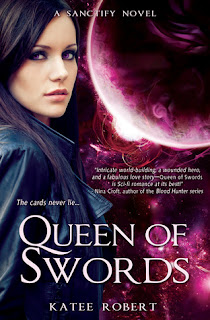 From Goodreads:
When the cards tell Ophelia Leoni she's supposed to marry the Prince of Hansarda, the gunrunner grits her teeth and boards the starship that comes for her. It doesn't matter if the ship's commander is the gorgeous stranger whose bed she just spent a wild, drunken night in. As a Diviner, she’s painfully aware the cards don't lie. Ever.

Boone O’Keirna knows Ophelia is trouble the second he sees the way she moves. Not about to let the deadly little hellcat marry his sadistic half-brother, Boone pretends to be the Prince’s emissary and kidnaps Ophelia. Too bad they can’t be in the same room without him wanting to throw her out an airlock–or into bed.

Even as they fight each other–and their explosive attraction–Ophelia and Boone sense something is wrong. Too much is going their way. Soon, they realize while the cards may never lie, the truth is sometimes hidden between them…and the future king of Hansarda is not one to take defeat lying down.


My Review:
I utterly loved this book! I mean, it was just so addicting, and I just had to read more, and it was just such a detailed, fantastic world, with a lot of things wrong with it, and these characters! Wow, they were fun to read about!

They both have issues, for one thing. Ophelia just lost her crew and ship to Sanctify, and yeah, she blames herself, because she didn't listen to the cards, and if she had, they wouldn't have died. But that had to happen for thing later on to work out well! Even if resulted in the deaths of her crew. Boone, he has a messed up family, his half brother put him in the dungeon, and cut him. A lot. And then it turns out that their dad did it to their brother. Which is just sad, that they were trying to make each subsequent family member, stronger. They actually thought it was a good thing to do. Sad.

I really enjoyed the cards, and the powers that the Diviners use with them, to know what's going to happen, what path they should take, and yeah, that was pretty cool! And that there were different levels of power, the one you were born with, the one you get when you become pregnant, and the one that you get when your daughter gets pregnant. And we get all three, between Ophelia and her mom!

Speaking of her mom, it was just so sad what happened to her, I wish they could've just shot him, instead of her sacrificing her life to kill him, because while he deserved to die, she didn't. And yeah, it's just sad that she did. Now she's not going to see her grand-baby be born, or live!

Yeah. This was just a fantastic book, I utterly loved reading it, and yeah, I can't wait to read more of this series, see what happens next!