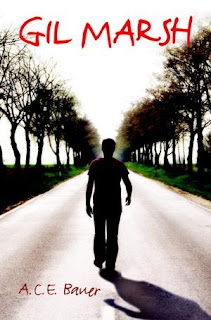 From Goodreads:
Good looking, athletic, and smart, Gill Marsh is the most popular kid at Uruk High School, even though he is only a junior. When Enko, a new kid from Montreal, shows up, Gil is wary. Yet Enko is easy going and matches Gil's athletic prowess without being a threat. Soon, the two become inseparable friends, practicing, studying, and double-dating.

Then suddenly, to everyone's shock, Enko succombs to an aggressive cancer.

When Enko's parents take his body and return to Canada, Gil is unable to even say good bye. He is inconsolable. Determined to find Enko's grave, Gil sneaks away and heads north.

Closely based on the ancient story of Gilgamesh, the Sumerian King from 3000 BC, A. C. E. Bauer has carefully woven the classic elements of myth to follow Gil's quest and explore the grief and growth of a young man.

My Review:
This book was pretty fantastic! Gil was an immature git at the beginning, with the whole apple stunt, but after Enko's death, he grows up, travels to another country by himself, goes through some tough times, and gets through it, with both a ring with a story given to him by Enko, and the determination to be at Enko's final resting spot, to thinking to try and bring him back from death, and accepting his death, Gil grows up. And he has an amazing, pain-fill, but fulfilling journey in which he learns and grows. It was really good!

The plot was a modern retelling of the story of Gilgamesh-which is a myth that I studied in grade 10-and his very close friend, which was really close to Enko's, and both the "E's" were a bit hairier then normal people, and such, and that's part of the myth, I believe. And yeah, that was a lot of fun to read!

And the story behind the ring, that was really fun, as the different parts were told, the beginning, parts of the middle, and the ending, it was a lot of fun to read!

This was a really good book, I really enjoyed it, so I hope you guys check it out!!