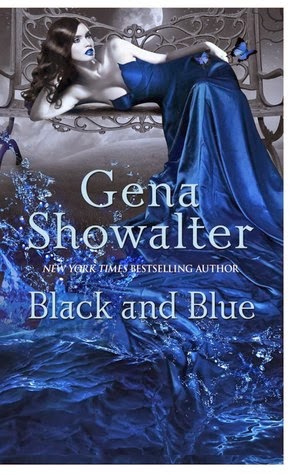 Corbin Blue is a man of many talents. One of the most powerful otherworlders ever born, he is wealthy, a professional football star, and a legend in the bedroom. But only a select few know he is also a black ops agent…and there is no better killer. When he and his crew are attacked and separated, he’s forced to turn to his boss’s daughter for help—a woman with even more secrets than Blue.

Evangaline Black has always been wary, guarded. No man has ever breeched her walls. Until Blue. He has never been denied something he wants, and now, he’s decided he wants her. As he sweeps her into his double life of seduction, intrigue, and danger, he helps her see beyond the darkness of her own past. But as an enemy closes in, Blue will have to let Evie go to keep her safe—even though he'd rather die than live without her…

My Review:
I absolutely loved this book! It was freaking fantastic, and utterly loveable, and yeah, so great, how they pretty much hated each other when they met, but now, 4 years later, with each other being the only one that the other trusts, they work together, and yeah, find that they don't hate each other anymore!

My only compliant is that for the Black and Blue cover, it originally had Blue on it in before it was cropped to just focus on Evie, and I just wish that they'd moved Blue, so that he was on the cover like Solo was on Last Kiss Goodnight. See:

But that has nothing to do with the book inside, which I absolutely loved!

Like, for example, all the nicknames that he had for her, my favourite being Black Plague, and in retaliation, the ones that she had for him, all these foods and body parts, just hilarious! Or when they were giving out the fake names that they'd used to donate to the charity, SHOW that Blue created, and his were sexually suggestive, I think the funniest was Iva Woody. Yeah.

We get to see Solo and Vika, and she's pregnant! Which is awesome! And we get to see, parts of John. Because the bad guys are evil, and the skinned him, first for ribbons original, and then for full on clothing, which is just horrible. He really needs a book! So glad that they found him, and killed the bad guy!

Loved this book so much, it was just amazing!