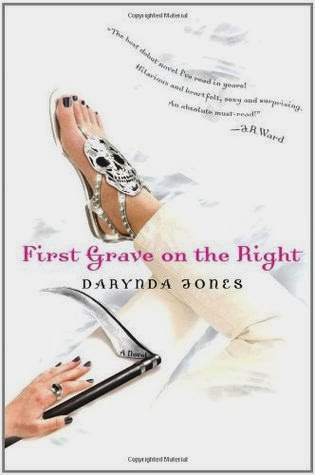 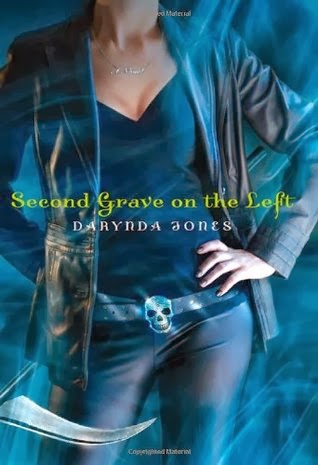 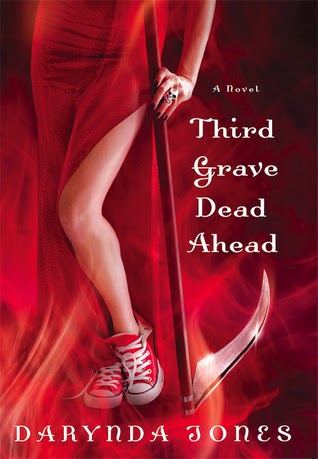 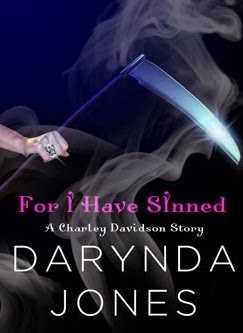 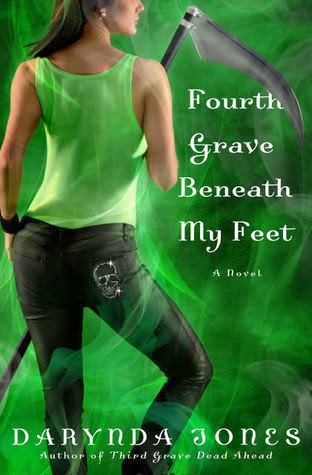 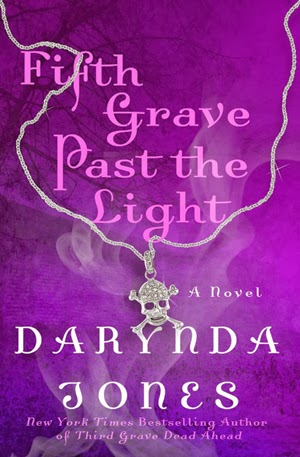 From Goodreads:
Charley Davidson: part-time private investigator and full-time Grim Reaper. Charley sees dead people. That's right, she sees dead people. And it's her job to convince them to "go into the light." But when these very dead people have died under less than ideal circumstances (i.e., murder), sometimes they want Charley to bring the bad guys to justice. Complicating matters are the intensely hot dreams she's been having about an Entity who has been following her all her life...and it turns out he might not be dead after all. In fact, he might be something else entirely. This is a thrilling debut novel from Darynda Jones, an exciting newcomer to the world of paranormal romantic suspense.

From Goodreads:
If you hang around with dead people, life can get pretty complicated. Take it from Charley Davidson, part-time private investigator and full-time Grim Reaper. Complicated is her middle name. The deceased find her very sparkly. Demons find her irresistible. And one entity in particular wants to seduce her in every way possible.
When Charley and Cookie (her best friend/receptionist) have to track down a missing woman, the case is not quite as open and shut as they anticipate. Cookie's friend Mimi disappeared five days earlier. Mimi then sends Cookie a cryptic message telling Cookie to meet her at an nearby coffee shop. The coffee is brewing, but Mimi's still missing. There is, however, a clue Mimi left on the bathroom wall: a woman's name. Mimi's husband explains to them that his wife had been acting strange since she found out an old high school friend had been murdered. The same woman whose name Mimi had scribbled on the bathroom wall.

Meanwhile, Reyes Alexander Farrow (otherwise known as the Son of Satan. Yes. Literally) has left his corporeal body and is haunting Charley. He's left his body because he's being tortured by demons who want to lure Charley closer. But Reyes can't let that happen. Because if the demons get to Charley, they'll have a portal to heaven...well, let's just say it wouldn't be pretty.


Can Charley handle hot nights with Reyes and even hotter days tracking down a missing woman? Can she keep those she loves out of harm's way? And is there enough coffee and chocolate in the world to fuel her as she does?

From Goodreads:
Paranormal private eye. Grim reaper extraordinaire. Whatever. Charley Davidson is back! And she's drinking copious amounts of caffeine to stay awake because every time she closes her eyes she sees him: Reyes Farrow, the part-human, part-supermodel son of Satan.

Granted she did imprison Reyes for all eternity, but how is she supposed to solve a missing-persons case, deal with an ego-driven doctor, calm her curmudgeonly dad, and take on a motorcycle gang hell-bent on murder when the devil's son just won't give up on his plan of seduction..... and revenge?

From Goodreads:
Darynda Jones revisits the sexy, suspenseful world of supernatural shenanigans she created in her Grave series with For I Have Sinned.  In this Charley Davidson story, Charley helps a woman find out how she died and gives her the closure she needs to pass through to the other side.

From Goodreads:
Welcome to the world of grim reaper extraordinaire, Charley Davidson. Try as she might, there’s no avoiding her destiny.

Sometimes being the grim reaper really is, well, grim. And since Charley’s last case went so awry, she has taken a couple of months off to wallow in the wonders of self-pity. But when a woman shows up on her doorstep convinced someone is trying to kill her, Charley has to force herself to rise above . . . or at least get dressed. It becomes clear something is amiss when everyone the woman knows swears she’s insane. But the more they refute the woman’s story, the more Charley believes it.

In the meantime, the sexy, sultry son of Satan, Reyes Farrow, is out of prison and out of Charley’s life, as per her wishes and several perfectly timed death threats. But his absence has put a serious crimp in her sex life. While there are other things to consider, like the fact that the city of Albuquerque has been taken hostage by an arsonist, Charley is having a difficult time staying away. Especially when it looks like Reyes may be involved.


Just when life was returning to normal, Charley is thrust back into the world of crime, punishment, and the devil in blue jeans.

From Goodreads:
Never underestimate the power of a woman on a double espresso with a mocha latte chaser high.
- T-shirt

Charley Davidson isn't your everyday, run-of-the-mill grim reaper. She's more of a paranormal private eye/grim reaper extraordinary. However, she gets sidetracked when the sexy, sultry son of Satan, Reyes Farrow, moves in next door. To further complicate matters, Reyes is her main suspect in an arson case. Charley has vowed to stay away from him until she can find out the truth...but then dead women start appearing in her apartment, one after another, each lost, confused, and terrified beyond reason. When it becomes apparent that her own sister, Gemma is the serial killer's next target, Charley has no choice but to ask for Reyes's help. Arsonist or not, he's the one man alive who could protect Gemma no matter who or what came at her. But he wants something in return. Charley. All of her, body and soul. And to keep her sister safe, it is a price she is willing to pay.

My first review of First Grave on the Right, Second Grave on the Right, Third Grave Dead Ahead, Forth Grave Beneath My Feet, Fifth Grave Past the Light
My Review:
Oh, I just love this series so much! It's just so fantastic! I just love Charley, and Reyes, and Cookie, and Ubie, and all these characters, they're fantastic! And this is just 5 books, there's more coming, and I just can't wait for them!

I enjoy reading the top of each chapter, what bumper sticker, shirt, or saying is there, because they are just hilarious, funny plays on regular things, and statements that are just too funny for words! They are almost a quarter of why I love this series so much! Another good quarter is Charley and Reyes!

They have just this great relationship, well, it doesn't work out so great, sometimes, but they are perfect for each other, no matter his little asides like that once she finds out how truly powerful she is, she'll leave him. They are just awesome! And funny!

And then the mysteries! Some carry over into each book, but those are more the personal ones then the ones that she gets as a P.I. because those are a bit more contained in each book! Though it's really starting to get, that there's so much going on, that I'm losing time in their world, and forgetting what just happened! So much going on to remember!

I just love this series so much, it's just one that I know I'll remember forever, and yeah, I can't wait for more!

First Grave on the Right:

Second Grave on the Right:

For I Have Sinned:

Forth Grave Beneath My Feet:

Fifth Grave Past the Light: