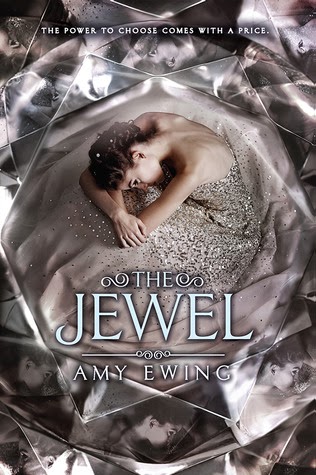 Purchased at the surrogacy auction by the Duchess of the Lake and greeted with a slap to the face, Violet (now known only as #197) quickly learns of the brutal truths that lie beneath the Jewel's glittering facade: the cruelty, backstabbing, and hidden violence that have become the royal way of life.

Violet must accept the ugly realities of her existence... and try to stay alive. But then a forbidden romance erupts between Violet and a handsome gentleman hired as a companion to the Duchess's petulant niece. Though his presence makes life in the Jewel a bit brighter, the consequences of their illicit relationship will cost them both more than they bargained for.

My Review:
This was a really fantastic book! I was meaning to be reading a tour book, and instead I was drawn to this book, and yeah, the pages just flew right on by, because yeah, it's that good of a book! Because this book has all the notes that aggravate me on behalf of the good guys, in this case, Violet, and Ash, and Raven.

The whole situation, with girls who can bear royal babies and who have special powers, and then are sold to the royal women, as possessions, is a horrible idea. I want to kick the lady in the books who came up with it. Not the author, because it's part of what makes this book so good!

Violet, she makes some good decisions, like trusting the one guy on getting her out, and some of the situations with the Duchess, but she also makes some bad ones, like the other half of the situations with the Duchess, and not telling Ash before that she was going to be leaving, and her little bits of communication with Raven with flowers, and every day objects that were important to the 2 of them.

The 50 or so pages on my e-reader, they were hard to read. Because I read the ending about halfway through, so I knew something bad was going to happen, and that sense of dread made me want to speed up so I could get past it, and also slow down, so I wouldn't get to it. And then it was done, and now I want the 2nd book! Because man, that is a cliffhanger, and that surprise, if you think about it, is exactly what had to happen!

This was a really fantastic book, and if you were having doubts about reading it, don't, because it's just so freaking good!