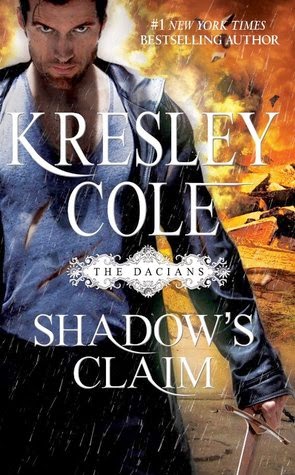 From Goodreads:
#1 New York Times bestseller Kresley Cole introduces The Dacians: Realm of Blood and Mist, a new paranormal series following the royal bloodline of Dacia, a vampire kingdom hidden within the Lore of the Immortals After Dark. Shadow's Claim features Prince Trehan, a ruthless master assassin who will do anything to possess Bettina, his beautiful sorceress mate, even compete for her hand in a blood-sport tournament— to the death.

Trehan Daciano, known as the Prince of Shadows, has spent his life serving his people—striking in the night, quietly executing any threat to their realm. The coldly disciplined swordsman has never desired anything for himself - until he beholds Bettina, the sheltered ward of two of the Lore's most fearsome villains.

SHE’S BOUND TO ANOTHER...

Desperate to earn her guardians' approval after a life-shattering mistake, young Bettina has no choice but to marry whichever suitor prevails—even though she's lost her heart to another. Yet one lethal competitor, a mysterious cloaked swordsman, invades her dreams, tempting her with forbidden pleasure.

A BATTLE FOR HER BODY AND SOUL

Even if Trehan can survive the punishing contests to claim her as his wife, the true battle for Bettina's heart is yet to come. And unleashing a millennium's worth of savage need will either frighten his Bride away - or stoke Bettina's own desires to a fever pitch...

My Review:
Oh, I so utterly enjoyed this book! We really got a good look at the Dacians, because we hardly got anything in Lothaire, so yeah, that was amazing! And apparently the Soceri as a species has a queen, who's power is controlling her people, in which she is a Queen of that magic. And she's one of Bettina's guardians! And there are primordial demons who apparently have extra special powers! Which is not so good for Bettina!

So yeah, the majority of this book takes place in the beginning half of Lothaire, so yeah, we get a little taste of what was going on from their side, that Bettina saw Trehan in various stages of cleanliness, depending on when he got back from the missions he was sent on, missions regarding Lothaire, like the one scene in the seat of the vampire Horde's power.

I really enjoyed how both their relationship, and the both of them, individually, grow, because it was organic, and it worked really well, from Bettina's fear, leftover from her attack, and how he coaxes her out of it, shows her that even if the worst happens, that he still has her back. And she brings him to life, away from stagnating, not changing, not growing, and yeah, that was good for both of them!

The ending? With them working out who poisoned him, and various opinions being shattered about each other, and yeah, all that stuff that's leading up to Dark Skye, yeah, I can't wait to read that, because I've known it was coming this series, and I've wanted their story since Kiss of a Demon King! And Sabine was in the end of this book!

Loved this book, it was just fantastic, and I can't wait to read more of this series!