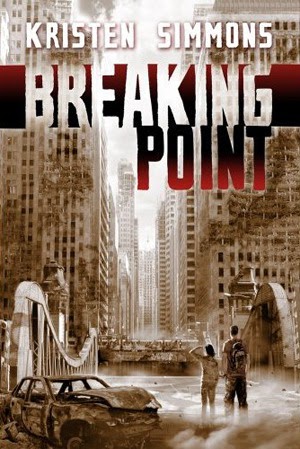 From Goodreads:
After faking their deaths to escape from prison, Ember Miller and Chase Jennings have only one goal: to lay low until the Federal Bureau of Reformation forgets they ever existed.

Near-celebrities now for the increasingly sensationalized tales of their struggles with the government, Ember and Chase are recognized and taken in by the Resistance—an underground organization working to systematically take down the government. At headquarters, all eyes are on the sniper, an anonymous assassin taking out FBR soldiers one by one. Rumors are flying about the sniper's true identity, and Ember and Chase welcome the diversion….

Until the government posts its most-wanted list, and their number one suspect is Ember herself.

Orders are shoot to kill, and soldiers are cleared to fire on suspicion alone. Suddenly Ember can't even step onto the street without fear of being recognized, and "laying low" is a joke. Even members of the Resistance are starting to look at her sideways.

With Chase urging her to run, Ember must decide: Go into hiding…or fight back?

My Review:
This was a pretty great book! I wish that it hadn't taken me so long to read it, because I did enjoy reading it! It did have some awkward moments, like when Ember was worrying about the cost of the sniper, seeing how it was going to be bad for the common people, while the resistance of the Wayland Inn was celebrating, but yeah, just great!

We got a few more characters, and some old ones, like Tucker, who was better in this book, though he caused Chase and Ember to be kicked out of Wayland Inn because they didn't want to work with him. And Ember was suspicious of him for most of the book.

We got to go back to their home town, and Ember remembered things from her past, with her mom, which was great, since she is an important part of Ember's life, dead or alive, and we got to see her friend again, running a safe house in Ember's old house. And they got to rescue Rebecca! Though that was hard, that she was pretty injured in her back, that she has trouble walking.

That ending! Devastation, plus the hope that there were some survivors! Can't wait to wait Three now!!! Can't wait to see if they're going to win against the horrible regime that's currently in place!