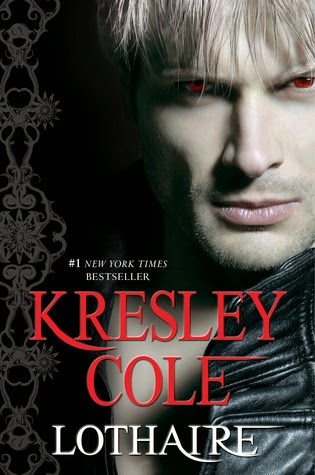 From Goodreads:
In this thrilling tale of the Immortals After Dark, #1 New York Times bestselling author Kresley Cole reveals secrets of the Lore, fierce realm of the immortals.

All Fear The Enemy Of Old

Driven by his insatiable need for revenge, Lothaire, the Lore's most ruthless vampire, plots to seize the Horde's crown. But bloodlust and torture have left him on the brink of madness—until he finds Elizabeth Peirce, the key to his victory. He captures the unique young mortal, intending to offer up her very soul in exchange for power, yet Elizabeth soothes his tormented mind and awakens within him emotions Lothaire believed he could no longer experience.

A Deadly Force Dwells Within Her

Growing up in desperate poverty, Ellie Peirce yearned for a better life, never imagining she'd be convicted of murder—or that an evil immortal would abduct her from death row. But Lothaire is no savior, as he himself plans to sacrifice Ellie in one month's time. And yet the vampire seems to ache for her touch, showering her with wealth and sexual pleasure. In a bid to save her soul, Ellie surrenders her body to the wicked vampire, while vowing to protect her heart.

Elizabeth tempts Lothaire beyond reason, as only his fated mate could. As the month draws to a close, he must choose between a millennia-old blood vendetta and his irresistible prisoner. Will Lothaire succumb to the miseries of his past . . . or risk everything for a future with her?

My Review:
When I first started reading this book, and the one page that's been in all of the series so far, of the hero and heroine's quotes, I was surprised when there were 3 quotes, one for Lothaire, one for Ellie, and then one for Saroya, so going in, I was thinking one thing, that was totally blown out in the first page of her POV!

This book was hilarious. I mean, it's Lothaire, who's the Enemy of Old (which is why Ellie starts calling him Leo later on in the book) just the way he is, with all his arrogance, says some things that while he doesn't intend for them to be funny, they are. And Ellie, she had a lot of saying passed on from her family that are very region specific, since while I haven't travelled a lot, none of them are very common!

I really hated Saroya. I mean, she's the goddess of death, basically, and since she went for more power, she got cursed into human bodies, which sucks for the humans, especially Ellie, because Saroya likes death for the sake of death, and she kills a lot of people. But then she meets her comeuppance with La Dorda, who kills her, a self fulling prophecy! And Dorda didn't just say ring, she has healed! And yeah, what Ellie came up with, that was awesome!

Loved the ending, how they worked through Ellie accidentally almost totally decapitating him, and then him sending her his cut out heart, and her sending him her cut off middle finger. And how Nix was his best friend, and if she hadn't told his dad (Emma's uncle) about Lothaire's plans to kill him, then Lothaire would've died sometime later, and then Ellie would've killed herself to stop Saroya. So yeah, great ending!

I can't wait to read more of this series!