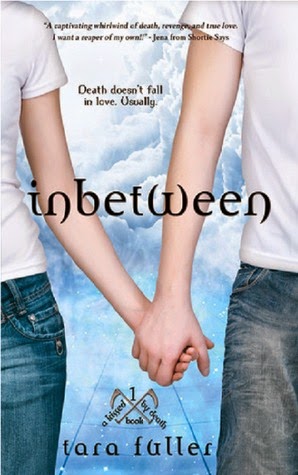 From Goodreads:
Since the car crash that took her father's life three years ago, Emma's life has been a freaky — and unending — lesson in caution. Surviving "accidents" has taken priority over being a normal seventeen-year-old, so Emma spends her days taking pictures of life instead of living it. Falling in love with a boy was never part of the plan. Falling for a reaper who makes her chest ache and her head spin? Not an option.

It's not easy being dead, especially for a reaper in love with a girl fate has put on his list not once, but twice. Finn's fellow reapers give him hell about spending time with Emma, but Finn couldn't let her die before, and he's not about to let her die now. He will protect the girl he loves from the evil he accidentally unleashed, even if it means sacrificing the only thing he has left…his soul.

My Review:
This was a pretty incredible book! It seemed to be going slow, but then when I looked around, it was done, and time had just flown right out the window! And I absolutely loved the idea of the Inbetween, a place between heaven and hell where souls who've done some bad things, go, until it's decided whether they go to heaven, hell, or back to earth!

I really enjoyed the relationships between all these characters, the one between Finn and Emma, and their previous one as Finn and Allison, and then the one between him, and the heaven and hell reapers of their region, Anaya, and Easton. The one between Emma and her best friend, Cash. They were all different, and they were all just so great!

I loved how we got the back story on everything, with Finn and Allison, and Maeve, and the bad decision that lead to Allison-now Emma-taking Maeve's chance to go back to earth, which leads to Maeve trying to torture, and eventually kill Emma. And then how Finn doesn't tell the whole truth about that, and how she's mad at him at first for that, but then works through all that!

I really enjoyed the ending, what with Anaya figuring out that Cash is going to live some more, and then how Cash can now, maybe see the reapers, and how he's not the person he used to be. And how Finn trading going back and being alive again to be with Emma, with when he dies, he'll be a guardian for the rest of time!

Loved this book, and I can't wait to read more!