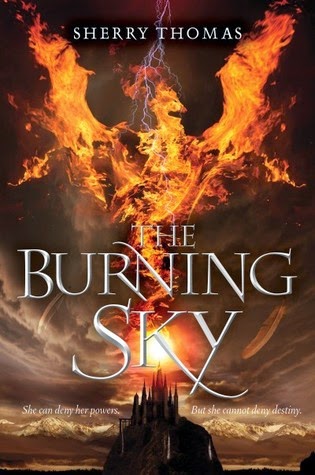 From Goodreads:
It all began with a ruined elixir and an accidental bolt of lightning…

Iolanthe Seabourne is the greatest elemental mage of her generation—or so she's being told. The one prophesied for years to be the savior of The Realm. It is her duty and destiny to face and defeat the Bane, the greatest mage tyrant the world has ever known. A suicide task for anyone let alone a sixteen-year-old girl with no training, facing a prophecy that foretells a fiery clash to the death.

Prince Titus of Elberon has sworn to protect Iolanthe at all costs but he's also a powerful mage committed to obliterating the Bane to avenge the death of his family—even if he must sacrifice both Iolanthe and himself to achieve his goal.

But Titus makes the terrifying mistake of falling in love with the girl who should have been only a means to an end. Now, with the servants of the Bane closing in, he must choose between his mission and her life.

My Review:
This book would make an excellent movie! It has action, a bit of romance, and lots of amazing magic, and world building, and yeah, the one scene in the crucible, when Iolanthe is talking to the Titus of the teaching room, and how he was...that would just be amazing cinema watching pleasure!

That opening few paragraphs? About a boy coming back to Eton after 3 months because of breaking his leg, and how that was almost all a lie? Totally confused me at first, but it really got my attention, and as the book went on, yeah, it totally made sense, and was just utterly brilliant!

I really enjoyed how the magic was, how the worlds were, because there was the 2 main ones, and others mentioned, because yeah, there were pretty amazing! Loved the differences between the regular magic user, and the elemental mage, and how the elemental mages powers were considered less, now, then the more controlled version.

That Titus shaped his whole life around his mom's prophecies, that he'd help the one who conjured lightning, and how his mom thought Iolanthe was a boy because of her short hair, and that's why he set up Fairfax, and then Iolanthe had to change some things to go and fit in. Yeah, that was funny!

This was just an incredible book, and I can't wait to read The Perilous Sea next week, I can't believe it took me this long to read this!