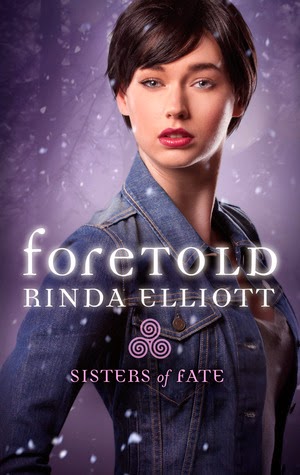 From Goodreads:
It is written that three Sisters of Fate have the power to change the world's destiny. But only if they survive...

The Lockwood triplets have had the prophecy drummed into their heads since birth. Still, Raven, the eldest of the sisters, can't believe it's really happening. She's the reincarnation of a Norse goddess? One of the sisters is destined to die? When it starts snowing in summer in Florida, the sisters fear the worst has come to pass. Ragnarok, the Norse end of the world, has begun.

Raven finds herself the secret protector of Vanir, a boy with two wolves, a knowledge of Norse magic and a sense of destiny he can't quite explain. He's intense, sexy and equally determined to save her when it becomes clear someone is endangering them. Raven doesn't know if getting closer to him will make a difference in the coming battle, but her heart isn't giving her a choice.

Ahead of the sisters is the possibility of death at the hand of a warrior, death by snow, death by water or death by fire.

Or even from something else...

The prophecy doesn't lie: one is doomed to die.

My Review:
This was a very excellent book! I mean, the first line is very catching, I mean, 3 days after the end of the world started, but compared to that, normal accidents still happening? Well, not so normal, because there's no such thing as coincidence when there's magic involved.

My one complaint is, that it almost seemed like they went from one bad thing to another, and usually that's OK, but in this book, it was just a smidgen harder to suspend reality for me, which really sucked, because it was really interesting and action packed, and it was just that bit harder to forget that it wasn't real, but that it was happening in a book.

And that's it. Because I loved everything else about this book, it was quick paced, and there was just such great romance, that they were pretty much instantly connected, and there was the mystery of who was doing this, if it was her mom. Because her mom has control over animals, and she used the spell/potion on other people before. But then her sisters are also thinking that their mom is with them, And then that it turns out that Loki's possessing their mom's body, and can travel really fast? I can't wait to read the next 2 books!

The magic, that was just great, and how she had to work to accept that the Norn's soul was a part of her, accepting her, using her name, and yeah, that was just the ticket to having more control, and making things easier, for when they go out to help her sisters!

I can't wait to read more of this series, because this book was just really fantastic!